Can A Phoenix Be a Spirit Animal? And What Are the Origins of Phoenix? 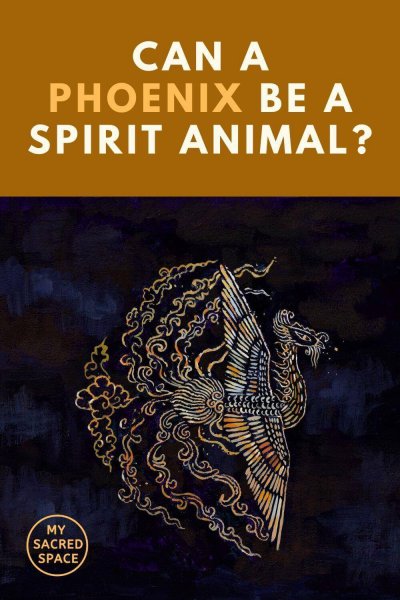 When I have found out that my spirit animal is a phoenix, I had this question in my mind: Can A Phoenix Be a Spirit Animal? It was partly because a phoenix was a mythological creature.

I am to answer this question for you after my long relationship with my dear spirit animal, phoenix. Yes, a phoenix can be a spirit animal and a very beloved one.

This article will try to answer these two questions: Can A Phoenix Be a Spirit Animal? And What Are the Origins of Phoenix?

Is a phoenix a spirit animal?

As we have spoken above, a phoenix can be a spirit animal, zodiac sign, horoscope, or totem.

For example, Scorpio has three animal totems, and one is the phoenix.

That is why people mostly call Scorpio spirit animal phoenix, even though a Scorpio person does not necessarily have the phoenix spirit animal but a phoenix totem.

Do zodiac signs have spirit animals?

The animals that appear in zodiac signs are not necessarily showing your spirit animal.

For example, in western astrology interpretation, Aries (the ram-the sheep), Taurus (the bull), cancer (the crab), Leo (the lion), Scorpio (scorpion), Capricorn (the goat), and Pisces (the fish) are directly related zodiac signs and the animals.

Animals and zodiac sign relationships in different cultures show us the importance of animals’ guidance role in this reality. They are the symbols of collective unconsciousness.

What is my zodiac spirit animal?

Such a question as what my zodiac spirit animal is not a valid question. Let’s say you were born in 1989, the year of snake according to Chinese astrology; this does not necessarily mean that you have the snake as your spirit animal.

Or let’s say that you were born on the 24th of October and your zodiac sign in western astrology is the scorpion. Again, this does not necessarily mean that your spirit animal is a scorpion.

For example, suppose you have found out that your spirit animal is a scorpion independently of your birthday or year, then, of course.

In that case, you can look to these animals’ symbols and personal traits in different astrological wisdom to collect signs for yourself to better understand the characters of your spirit animal.

What is the spirit animal for Scorpio?

I do not know the answer to this question. The person who has the zodiac sign of Scorpio will find their spirit animal.

Here, I want to dig deeper into this question of the animals related to Scorpio, as it has a direct relationship with phoenix.

Scorpio is the only zodiac sign with three animal totems which means that a Scorpio person passes through three phases in their life, and an animal symbolizes each phase.

A venomous animal scorpion has a healing property in its poison. So, such a vicious animal has the potential to spread healing and peace.

Scorpion can only reach this potential after significant transformations; this is where the phoenix symbolization comes in.

It symbolizes the bird of life and resurrection, and the birth dates are between June 24-July 24.

It is believed in the Egyptian horoscope that if you are a phoenix, for you, nothing is impossible.

You have the incredible power to be an optimist and believe in your dreams and act for these dreams.

You are an action taker, dreamer, inspirer, and visioner. The weak side of this horoscope could be that you can be dreamy and unrealistic if you are not in your center.

I was not born on June 24-July 24, but I have a spirit animal as a phoenix. And these explanations of the Egyptian horoscope do perfectly fit my trait.

Zodiac signs do not necessarily show you what your spirit animal is.

What animal is your spirit guide, and how do I know my spirit animal?

The ways that I have tried and worked perfectly, even though with some patience and time, were shamanic journeys and meditations.

That is why I am recommending you find your spirit animal by practicing those.

You can find more about how to find your spirit animal here.

Even though there is no set symbol for phoenix, the characters have something in common: the bird is rising and mainly in the middle of the fire, burning.

What does the phoenix symbol represent?

This symbol represents immortality and being reborn from ashes again and again.

What is the symbolic meaning of a phoenix?

Phoenix is the symbol of immortality, being born again and again.

Garuda in Hindu and Buddhist tradition, firebird in Slavic mythology, the Persian Simurgh, the Georgian paskunji, the Arabian anqa, the Turkish Konrul, also called Zümrüdü Anka (“emerald anqa”), the Tibetan Me byi Karmo, the Chinese Fenghuang, and Zhuque, and the Japanese Hō-ō.

Over time, extending beyond its origins, the phoenix could variously symbolize renewal in general as well as the sun, time, the Empire, metempsychosis, consecration, resurrection, life in the heavenly Paradise, Christ, Mary, virginity, the exceptional man, and specific aspects of the Christian life.

We see the origins of the phoenix in the Gnostic manuscript On the Origin of the World from the Nag Hammadi Library collection in Egypt, generally dated to the 4th century.

Then Herodotus attributed the origin of the phoenix to Ancient Egypt in the 5th century BC.

In the 6th century, Hesiod wrote about phoenix in his didactic poem called Precepts of Chiron.

Moreover, many people gave shape to the form that we have the phoenix we have in our minds. Some include Herodotus, Lucan, Pliny the Elder, Pope Clement I, Lactantius, Ovid and Isidore of Seville.

How did phoenix get its name? Where does the word phoenix come from?

The word phoenix entered English word from Latin. Thus, it could mean ‘the Phoenician bird’ or ‘the purplish-red bird.’ Moreover, in the 12th century, the term had also been used to mean “excellent person.”

Phoenix is such a powerful mythological animal that I intend to write a typical article about spirit animals with the topic of “What Does a Phoenix Spirit Animal Mean and Symbolize?” but I could not.

So my intention to write this one article ended up in 6 pieces, as you can see below.

It is for many reasons.

One is because the phoenix is my spirit animal, and I adore him and also is such a powerful symbol from our collective unconsciousness that it inspires us again and again.

If you could connect with this article, check our other themes as well: