Can Your Spirit Animal Change Over Time? 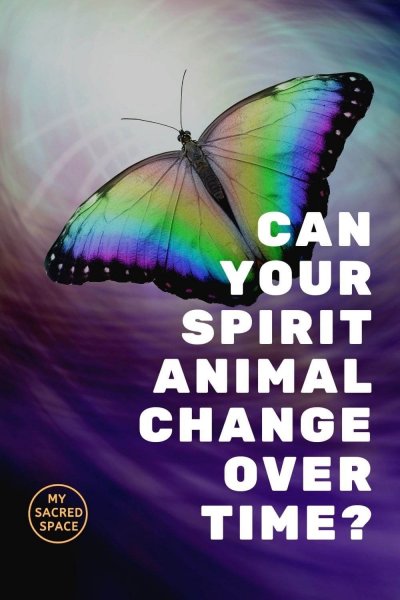 I have been making my shamanic journeys with my spirit animal, and then suddenly, I have begun to see another spirit animal. But wait a minute, “can your spirit animal change?” was my question.

Ok, let’s dive deep to explore this question. Are you joining?

How many spirit animals can you have?

These spirit animals would come temporarily to your life.

You can read more about these different kinds of spirit animals here and here.

How many spirit animals can you have at once?

I do not have a fixed number about that, and I am not sure if anybody can give that.

Just before a significant life event in my life, I had three spirit animals at once.

One was the spirit animal that guided me all my life.

The next one was a spirit animal that I saw in physical life.

Then, lastly, I had a messenger spirit animal that joined five shamanic journeys during that period and then disappeared.

How many different spirit animals are there?

“Native American tradition provides that each individual is associated with nine different animals that will complement each person through life, acting as guides.”

This is the only information I could find about this question.

Spirit animals come from Native American culture, whereas Shamanism has been used in all different ancient cultures worldwide.

I am not sure if the term “spirit animal” existed in different shamanic beliefs.

The only information that I could find was about “fylgja.”

In Norse mythology, a fylgja is a supernatural being or spirit which accompanies a person in connection to their fate or fortune.

Alternatively to the spirit animal, there are other synonyms. Or other guides are supporting you in your life journey.

In our life journey, we are not alone. Different spirits are supporting us.

Especially those human spirits who have walked the same path and reached union with God are supporting us in this journey.

I have written more about this here.

Are spirit animals and totems the same?

Even though spirit animals and totems are very similar, there is a slight difference between them.

What are spirit animal totems?

Let’s look at the difference of the spirit animal and totem via the explanations in different books by various writers:

The term refers to an animal, bird, reptile, fish, or insect with which you feel a strong and perhaps inexplicable affinity.

A totem is your primary spirit animal guardian or the guardian of your family or group.

Some indigenous tribes in North America carved totem poles depicting the various animals that protected their people and brought blessings to them.

Archeologists have discovered animal figurines buried in tombs around the world, perhaps placed there to guide human souls into the spirit realm.”

“The term totem animal has two meanings. First, a totem animal is typically shared by a family, clan, or group.

In many indigenous cultures, the family you were born into will have a totem animal in common.

In modern societies, various groups also have communal totems, such as sports teams or clubs that identify with a totem animal.

The second meaning of totem animal is a symbolic object of a particular animal, such as the small wolf, tortoise, raccoon, and hawk glass figures I mentioned earlier sitting by my computer.

We often give our children totem animals, such as teddy bears or bunny rabbits to give them comfort.”

“Spirit animals are expressions of animal energies that will be guided and taught in strengthening intuition. They are considered to shed light on people with their healing powers and inspiring wisdom.

The word Totem, which has a similar meaning, was borrowed from the indigenous peoples of North America and Canada, the Anishinaabes and Ojibwes, from the words “odoodeman” and “oto-te-man,” meaning blood ties, kinship.

You can use both the terms spirit animal and spirit guide.

Spirit animal and alebrije were unrelated terms, whereas somehow they have been connected.

First, let’s look at what alebrije is:

Here is the story of alebrije according to WhaleBone magazine;

“When Pedro Linares woke from a fever dream, seemingly terrifying creatures followed him back from his sleep.

At first, he found them threatening, then later, as his illness cleared, he began to believe the mystical animals came to protect him and helped make him healthy again.

The Oaxacan artist rendered the visions in paper mâché, though his first attempts were too frightening for most; he then developed the extravagantly colored and more whimsical alebrije in the late 1930s that went on to become a folk art tradition.

Linares beasts crossed into the art world when they caught the attention of Frida Kahlo and Diego Rivera who commissioned him to create alebrijes for them.”

Afterward, alebrijes were presented as spirit animals with vibrant colors in the popular Pixar film “Coco.”

You can use power animal and spirit animal interchangeably.

Steven farmer and spiritanimal.info say that there are slight differences.

What is a power animal?

Let’s look at what they say;

According to Steven Farmer in Pocket Guide to Spirit Animals

“The term power animal has its origins in Shamanism.

This is a specialized animal spirit guide that shamans or shamanic practitioners acquire early in their initiation into their practice.

Their power animal travels with them whenever they go on a shamanic journey, which is an altered state of awareness where the practitioner sends their soul or consciousness into non-ordinary reality—a shamanic term for the spirit world —to receive teachings, guidance, and healings.”

During initiations or shamanic journeys, the shaman would find one or several animals that she or another person is associated with.

Traditionally, the spirit animal is used for guidance.

Think of your spirit animal as a guardian spirit or spirit guide. It can play the role of protector and provide guidance.

It’s like a “personal guide or protector” with a personal affinity with the person it’s associated with.

Whereas power animals are;

In addition, the spirit of the animal could unite with the person it “chose” in more personal ways, and one will often find similarities in traits of personality, characteristics, and synchronicity between the two.

As such, the power or essence of the animal can be felt or communicated.

In that sense, spirit animals can also be referred to as “power animals.”

Can a spirit animal be an insect?

Again in the book of Steven Farmer, I have seen such a description about insects:

“Although every creature on the planet can be an animal spirit guide, in most shamanic traditions, domesticated animals can’t be power animals because they’ve lost much of their wildness and are removed from the natural world.

Likewise, some traditions believe that insects are to be excluded from being power animals because of their size and nature.”

Your lifelong spirit animal will probably be there with you in your shamanic journeys and will not change all your life.

Maybe sometimes, you will meet with some additional spirit animals lighting your way.

We are talking about a real adventure, my friend. So come with an open mind and open heart.

Below is a Pinterest friendly photo…. so, you can pin it to your Spirit Animal Board!