Christmas Rituals and Traditions in Spain 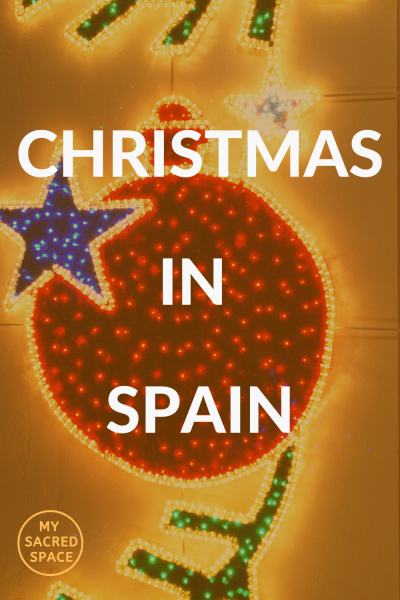 How Christmas celebrated in Spain?

Christmas celebrations in Spain is full of joy. It is a relaxing time, being in the flow with the family. Eating good food, enjoying good accompany, not having anything to do other than being.

The celebrations start on the 22nd of December with the announcement of the Spanish lottery and take part until the arrival of 3 Kings on the 6th of January.

During all these days one would eat delicious food, drink many alcohols, have a lot of conversations, listen, and sing “villancicos”- Spanish Christmas carols and meanwhile just be. The time will flow, and you will just let yourself be. That is Spanish Christmas for me.

I was not born to a culture with Christmas and I began to experience it for the first time in Spain, Catalunya, Barcelona. For 15 years I asked my partner around the 22nd of December, ‘Ok, let me know the plan, which days are those important ones. He was explaining to me again and again for 15 years, I was listening with half ear as I enjoyed it so much to be in the flow.

This year, to write this blog post, I am sitting down and looking at those days that are special for Christmas. To write this post is pure joy for me, it is a kind of ode to my second home, the land of fiestas!

Christmas celebration in Spain is full of traditions, so full of rituals, symbols, and ceremonies. This is an invitation for you to enjoy a Christmas journey to Spain from my eyes. If you are ready, me also! Let us start.

El Gordo is the Christmas Spanish lottery. It is announced on the day 22nd of December, which is kind of the last announcement before the start of the celebrations. Once El Gordo is announced, people check if they have everything ready: last gifts bought, the delicious foods prepared, the menu has been thought. Everything is ready, the magic is almost starting.

When I first started to live in Spain, I was amused by the lottery system in Spain and “El Gordo”. Each bar, school, café, restaurant, the family is sharing the same number. Imagine you are buying the same number as your family, school, neighborhood. If you win all win.

It is quite common that the parents or grandparents are buying the same number for all the family.

On the 22nd of December during the day, the Christmas lottery numbers are chosen, and they are announced by the school children singing them. This is a tradition in Spain for 400 years.

El Gordo is important, as it has 30% of the total profit of the Spanish lottery.

The night of the 24th of December is called Nochebuena, it is Christmas Eve. Time of the family dinner. It changes a lot according to the region what people eat on Christmas eve dinner in Spain, but if there is something common, it is that whatever you eat, it is delicious. The most quality one, prepared with love and care.

That night all family together, children sing their “villancicos”- Christmas Spanish songs that they learn, and all the family joins them. I love this part, as these songs are beautiful and the joy of the children worth witnessing.

That is the night, that Papa Noel-Santa Claus is coming while children are sleeping. Keep in mind that in Spain 3 Kings are more common than Santa Claus. Children write their letters mostly to 3 Kings.

But 3 Kings are coming from the East, far away. So they could not arrive earlier than the 6th of January. As the school vacations start around the 23rd of December and finish around the 7th of January, for the children to enjoy their new toys, each time Santa Claus is bringing the toys more than the kings.

In Spain each region has its traditions and symbols, so their own Papa Noel:

Midnight Misa de Gallo takes place, which is called Mass of the Rooster. As the 25th of December is the celebration of the birth of Jesus, the rooster is announcing the arrival of this holy day.

This is officially the day of Christmas in Spain, even though it is a period, more than just a day. After the huge dinner with the family, people continue to eat and drink with the family on Christmas day as well. This time not the dinner but the long lunch.

Again, what you eat varies according to the region. As I have lived Christmas in Barcelona, I could say that the 25th of December eating “galet” soup is common there. Galets are large shell-shaped pasta. You stuff the pasta shells with meatballs. After the long dinner of Christmas Eve, it is just what your stomach needs to start to eat again. Delicious!

This day is not celebrated in all of Spain but Catalunya. It is the celebration of the day of Saint Estaban. It is common to eat Canelones this day. “Canalones” is a cylindrical type of lasagna which is cooked with the rest of the food from the day before, with “galet” soup.

This day in Spain is celebrated as April’s fool day. People are doing jokes with each other. Even on TV and newspapers, they have permission to publish not real news.

It is weird because the story of this day is sad. It is the day when the King decided to kill all the children below 2 years old, to be able to kill the baby Jesus. Who knows maybe it is the way of dealing with trauma in our collective consciousness?

The last day of the year is celebrated with a dinner with family and friends. Just before midnight, there is a tradition of eating 12 grapes, while counting back from 12. This is the weirdest tradition I have ever lived. I mean it never makes sense to me, entering a new year with a challenge of eating 12 grapes, having your mouth full of grapes instead of hugging each other.

There is this urban legend saying that there was this company who could not sell the grapes that year so made a marketing campaign by making up this ritual. People loved it so they continue to do so. Keep in mind that we are in January and it is not the time of the grapes and so the grapes are expensive. I do not know, I never understand this tradition.

This night finally Kings arrive in Spain, on their camels. In big cities such as Barcelona and Madrid, it is a huge celebration. People go with their kids to see them. The 3 Kings are coming with their big crew. It is a big celebration and a colorful show. They are throwing candies while they are passing in the parade.

On the TV, all the channels are showing on their news the arrival of the Kings as joining to the story and creating more magic for children.

According to the story, 3 Kings followed a star to find the baby Jesus and brought gifts to him, each with symbols.

I always mix 3 Kings, so here is the list of them:

This night children clean their shoes and leave them outside so that 3 Kings could leave candies inside (of course if they have behaved good enough, otherwise they receive coal!), as tonight is the one 3 Kings comes to the house to leave the gifts. They also leave some food for the Kings and their camels

This day children wake up to receive the gifts that the kings left to them. It is the day of eating “chocolate con churros (fried-dough pastry)”- at least in the family of my partner.

Also, people eat a delicious cake called Roscon de Reyes, which inside a person find a little gift which is believed that would bring good luck.

Even though it is from the times where Christmas is celebrated more like a Carnival, inspired by the Roman feast Saturnalia. Slaves were eating this cake and inside there was a bean. That slave who was finding the bean was becoming the king for one day during the celebrations.

This day there is another lottery called Lotería del Niño, which is announced today as it is the final day of Christmas.

Christmas dishes can vary according to the region whereas some deserts are common: ‘mazapán’ (made of almonds, sugar, and eggs), ‘turrón’ (made of honey and toasted almonds), and ‘polvorones’ (made of flour, butter, and sugar).

Cava is the champagne in Catalunya you drink through Christmas time.

Christmas trees and the lights through all the streets are very common in Spain as Christmas decorations throughout all December.

There is another thing I want to talk about, which is called: “Belen” or “Pesebres”. They are the nativity scenes of Jesus created by little figures by people. These could take place at home or in public places.

These figures take an important place at the time of the Christmas decoration. People can buy these figures for their “Belen” in Christmas markets.

There is a special figure in Catalunya to use in “Belen”, called “caganer”: shitting man. People put this figure in the hidden part of their “Belen”.