Gilgamesh Epic: Is It A True Story? 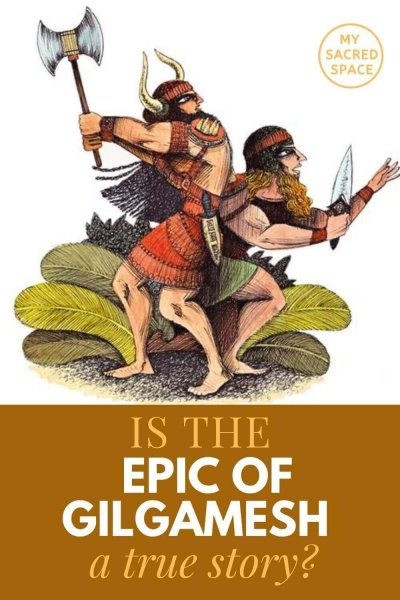 Today I want to talk to you about Gilgamesh Epic, an epic from my land. I am from Anatolia. One part of Anatolia is part of Mesopotamia as well.

The more I begin to listen in silence, the more the symbols of collective unconsciousness are talking to me. There I see that there are symbols related to my unique being: my family, the land I was born in, the land I lived, the languages I speak, the stories, myths, epics, and songs of these lands.

Maybe that is why Gilgamesh is very dear to me. I feel him like a sweet-heart older brother, who is sharing stories of his life adventure with full compassion and open heart to share his wisdom.

Join me with an open heart and mind and your humbleness. Because here we are talking about a hero’s journey!

What is the Epic of Gilgamesh?

The epic of Gilgamesh is the world’s oldest known fictional story.

Started as a series of Sumerian poems and tales dating back to 2100 B.C but the most complete version was written around the 12th century B.C by the Babylonians.

This epic was found written on 12 tablets, that is why it is also called Gilgamesh epic tablets.

The epic was discovered in the 19th century and since then experts and translators have been trying to understand the story, its history, and its various versions.

The epic takes place in Mesopotamia in the kingdom of Uruk, whose borders are now in Iraq.

What makes the Epic of Gilgamesh an epic?

Epic definition in Oxford languages is this:

“A long poem, typically one derived from ancient oral tradition, narrating the deeds and adventures of heroic or legendary figures or the history of a nation.”

Sumerian Gilgamesh epic is composed of different poems found on the tablets and finally was converted to a long poem which makes Gilgamesh an epic.

Is Gilgamesh an epic hero?

Gilgamesh represents an epic hero because he is the main character of this epic. He was a major heroin ancient Mesopotamian mythology. He was likely a historical king of the Sumerian city-state of Uruk.

What is the epic of Gilgamesh mainly about?

It consists of the stories of Gilgamesh, the king of the kingdom of Uruk. It tells how a boy with an extraordinary but destructive power turns into a wise and fortified man.

Who wrote the Gilgamesh epic?

The writer is anonymous, but these stories were woven into a connected narrative by a script name Sîn-lēqi-unninni.

Yiyun Li says in her book, The Story of Gilgamesh that.

‘If you think the story of Gilgamesh is ancient and foreign, I can assure you it is not. When you read it, you will see that this story is not so different from the story of your parents, grandparents, uncles, and aunts, or your favorite teacher.’

I like to imagine that Gilgamesh, the king of the Uruk, has written his own stories. At the end of the day, this is the common journey of the human. We start the journey; we receive the final award after learning the secrets of the Union, but the journey does not end there. The hero needs to come back and become the expert of the two worlds and share what he has learned.

So, I imagine Gilgamesh, came back to share what he has learned during his hero journey. He succeeded though, as it is not an easy task. Look how Joseph Campbell explains this task of coming back from the journey to explain:

“How teach again, however, what has been taught correctly and incorrectly learned a thousand times, throughout the millenniums of mankind’s prudent folly?

How translate into terms of “yes” and “no” revelations that shatter into meaninglessness every attempt to define the pairs of opposites? How to communicate to people who insist on the exclusive evidence of their senses the message of the all-generating void?”

Joseph Campbell, The Hero with A Thousand Faces

Who was the epic of Gilgamesh written for?

To the people of the kingdom of Uruk and many more. Gilgamesh has returned from the hero’s journey and has become a wise and fortified person.

We can again get ‘inspiration from Joseph Campbell.

“The hero, therefore, is the man or woman who has been able to battle past his personal and local historical limitations to the generally valid, normally human forms. Such a one’s visions, ideas, and inspirations come pristine from the primary springs of human life and thought. Hence they are eloquent, not of the present, disintegrating society and psyche, but of the unquenched source through which society is reborn. The hero has died as a modern man; but as an eternal man—perfected, unspecific, universal man—he has been reborn. His second solemn task and deed, therefore (as Toynbee declares and as all the mythologies of mankind indicate) is to return then to us, transfigured, and teach the lesson he has learned of life renewed.”

Joseph Campbell, The Hero With A Thousand Faces

And again Yiyun Li explains this perfectly in her book The Story of Gilgamesh;

‘All great stories are great because they tell not only their heroes, but us as well. This is the reason why Gilgamesh’s story is no different from ours, even though it took place almost four thousand years ago.

Gilgamesh is a person who loves his family and longs for adventures. When he meets his true friend and companion Enkidu, he loves him and includes him in all his dreams. The grief he felt when he lost Enkidu to death reflects the grief we feel when we lose our loved ones.’

What language is the epic of Gilgamesh written in?

Gilgamesh is written in Akkadian. According to Wikipedia Akkadian is an extinct East Semitic language that was spoken in ancient Mesopotamia (Akkad, Assyria, Isin, Larsa, and Babylonia) from the third millennium BC until its gradual replacement by Akkadian-influenced Old Aramaic among Mesopotamians by the 8th century BC.

Is the Epic of Gilgamesh a true story?

The Gilgamesh myth is based on a real king as most historians generally agree Gilgamesh was a historical king of the Sumerian city-state of Uruk, who probably ruled sometime during the early part of the Early Dynastic Period ( c. 2900 – 2350 BC).

Whereas maybe the real question is what is real? Are our dreams real? Our visions?

When people asked Jung if dreams are real, he said more real than you could imagine. Dreams, epics, mythologies are having the same source: collective unconsciousness.

Gilgamesh Epic is an incredible story full of symbols that are guiding the journeys of each and every one of us in every moment.

This makes this story more real than I could imagine.

“The greatest tale of the elixir quest in the Mesopotamian, pre-Biblical tradition is that of Gilgamesh, a legendary king of the Sumerian city of Erech, who set forth to attain the watercress of immortality, the plant “Never Grow Old.”

“The research for physical immortality proceeds from a misunderstanding of the traditional teaching. On the contrary, the basic problem is: to enlarge the pupil of the eye, so that the body with its attendant personality will no longer obstruct the view. Immortality is then experienced as a present fact: “It is here! It is here!”

Here you can read about the summary of Gilgamesh’s epic story and its characters. Before finalizing, let’s get some inspiration from the Gilgamesh epic’s quotes.

“Gilgamesh was called a god and a man; Enkidu was an animal and a man. It is the story of their becoming human together.”

Herbert Mason, The Epic of Gilgamesh

“What we finally do, out of desperation … is go on an impossible, or even forbidden, journey or pilgrimage, which from a rational point of view is futile: to find the one wise man, whomever or wherever he may be; and to find from him the secret of eternal life or the secret of adjusting to this life as best we can.”

Gilgamesh, why dost thou run about this way?

The life that thou art seeking, thou wilt never find.

When the gods created man,

they put death upon mankind

and held life in their own hands.

prepare each day for some pleasant occasion.

Day and night be frolicsome and gay;

let thy clothes be handsome,

thy head shampooed, thy body bathed.

Regard the little one who takes thy hand.

Let thy wife be happy against thy bosom.

“A real friend is a companion for your heart.”

Yiyun Li, The Story of Gilgamesh

These myths and epics are gifts from our ancestors to us. Those that they walked on the path of becoming human, did their best to share their stories to share their wisdom with us which is not an easy task at all.

So, let’s listen to them again and again, share with our kids and our friends around the big fires, and deeply listen to see what is unrevealing for us at that specific moment from their wisdom.

Below is a Pinterest friendly photo…. so, you can pin it to your Wisdom of Myths Board