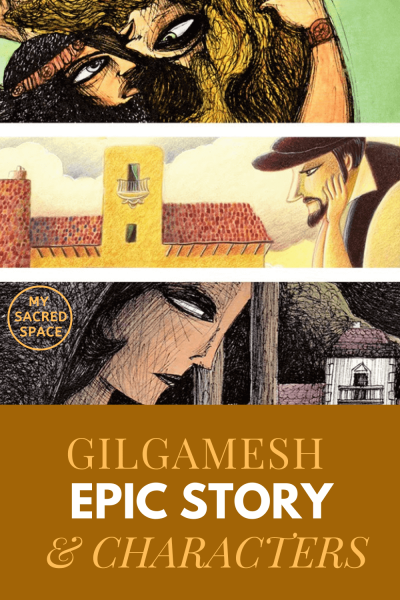 Stories, myths, and legends always took my attention. In some parts of my life, I even took storytelling classes. With our teacher, we were meeting 18 women during 12 months as a journey of healing with stories.

In stories, all the characters are us as in dreams. All the details are mirroring information about our different parts in the journey of feeling whole again.

I love to read The Story of Gilgamesh by Yiyun Li which has been published by Penguin Random House as part of the “Save the Story” series. The other day I was reading it to my kid and thought that could be a nice idea to make a summary for you of this beautiful epic.

Gilgamesh was a special kid as a son of king Lugalbanda and the goddess Ninsun. He was living happily and quite selfishly in Uruk, in his kingdom. He was behaving as he was the owner of everything and harm to his people.

So much that because of his injustice, the people of Uruk prayed for the Gods, to help them. Finally, the king of gods, Anu heard them and talked to the goddess Aruru, and asked her to create a human being as strong, wild, and brave as Gilgamesh and then leave him the world for both to find each other.’

So, she did, and she created a creature called Enkidu and left him to the forests where he was living with other animals.

One day a hunter saw him, and he was so afraid because of his power. But the hunter had a problem as it became impossible for him to hunt any animals as Enkidu was helping them.

Gilgamesh listened to him and told him to go to Ishtar’s temple and find the temple priestess and especially one called Shamhat.

Then Shamhat went to the forest with the hunter. Enkidu saw her and they passed time together. Each time he got separated from his wildlife and then Shamhat persuaded him to come with her to Uruk.

Once in Uruk, Enkidu met with Gilgamesh and they fought until Gilgamesh won the fight. After the fight, they became very good friends.

Both Enkidu and Gilgamesh were very happy living together in Uruk, but Gilgamesh wanted to go to kill the monster Humbaba, the protector monster of the cedar forest to become a hero. Neither Enkidu nor the old people of Uruk and his mother could change his mind. His mother prayed for Shamash.

They started a trip that was full of different adventures and symbols. Enkidu guided the trip as he knew the forest very well. When they were frightened, they supported each other as brothers and very good friends. They killed the Humbaba with the help of Shamash but at that time, Humbaba cursed them saying that Enkidu would die, and Gilgamesh would not be able to live because of his sorrow.

Bull of Heaven of Ishtar

They came back to Uruk and celebrated with all the people of Uruk. Then Ishtar became very attracted to the adventures of Gilgamesh and wanted to marry him. But Gilgamesh was not the same man, his adventures changed him, and Ishtar was very famous for all her lovers who she left and broke their hearts. So, he did not accept and Ishtar getting very angry asked for his father-Anu’s famine causing the bull of the sky. Anu gave the bull, so Uruk got a big risk of famine. Gilgamesh and Enkidu killed the bull which caused Ishtar furiously.

Then Enkidu saw a dream that because Enkidu and Gilgamesh killed Humbaba, Gods were very angry with them and wanted to kill Enkidu. After this dream, he became so ill and each day his situation got worse, and finally, he died.

Gilgamesh did not know what to do with his sorrow and began to look for the secrets of being immortal. For that, he decided to go to see Utnapishtim.

Because years ago, 5 Gods decided to send a flood to finish with human race-as they were very angry with human beings. The God Ea-who had a big love for human-said to Utnapishtim, who was the king of Shuruppak, to build a big ship and store food and get people and animals inside.

So, he did. The flood continued for 7 days and during this time Goddess Aruru felt so bad thinking that humans disappeared.

Utnapishtim’s ship worked, and people and animals were saved. Gods seeing this made him immortal.

So, Gilgamesh started a journey to find Utnapishtim, this time alone. Went south to Mashu Mountains where there was a tunnel. The sun was passing from this tunnel and protected by 2 scorpions.

Gilgamesh asked for permission to enter, and they did not let him at first, but the female scorpion insisted to let him pass, and then the male one also accepted.

They said no human passed this tunnel before, that he had to run for 12 hours without stopping in total darkness otherwise the sun would catch him, and he would die.

So, he did, and he arrived at another word where the Gods live. There he entered an inn and there was a woman called Siduri. There Gilgamesh explained to her that he wanted to find Utnapishtim to learn the secrets of immortality. Even though she did not want to tell him, finally she told him that Utnapishtim lived on the other side of the ocean. Ocean had mortal water and only Urshanabi could help him to pass that water.

Gilgamesh went near the sea, but Urshanabi was not there. Inside the boat, there was a man from stone and Gilgamesh destroyed them. When Urshanabi came Gilgamesh explained to him his intention and Urshanabi told him that those stone men were the only things that the mortal water would not affect so could help him. He advised him to go to the forest and prepare 300 big sticks of 30 meters each from 300 trees. Gilgamesh prepared exactly what he said. Once done Gilgamesh used these sticks to pass the ocean, so that the ocean’s mortal water did not touch him.

So, they arrived at Utnapishtim’s place. There, Gilgamesh again said his intention and there Utnapishtim told him to stay awake for 7 days. But Gilgamesh being very tired, slept for 6 days. For each day, he asked for his wife to cook bread in case Gilgamesh would not believe it. On the 7th day, Utnapishtim woke him up. Gilgamesh did not believe at first and then he saw the bread. The bread of the 1st day was staler, and the 7th day was fresh.

The wife of Utnapishtim persuaded him to help Gilgamesh.

Then Utnapishtim said to Gilgamesh to go to the middle of the holy deepness water and find a magical plant there which was something different than being immortal: making people young.

There he went with Urshanabi and found the plant then while going back, slept near a lake. There a snake found the plant and ate it and changed his skin. Gilgamesh when he realized that the snake ate the plant lost his hope.

He continued his journey and came back. When he came back, they realized that he was changed. His heart was full of wisdom and surrender and humbleness. He came back to his city and served his people and wrote his stories on 12 tablets.

I hope you enjoyed the quick journey of the Gilgamesh epic. If you are interested you can get the book of Yiyun Li, or Andrew George.

Finally, you can also be interested in this other article of ours;

Gilgamesh Epic: Is It A True Story?

Below is a Pinterest friendly photo…. so, you can pin it to your Wisdom of Myths Board