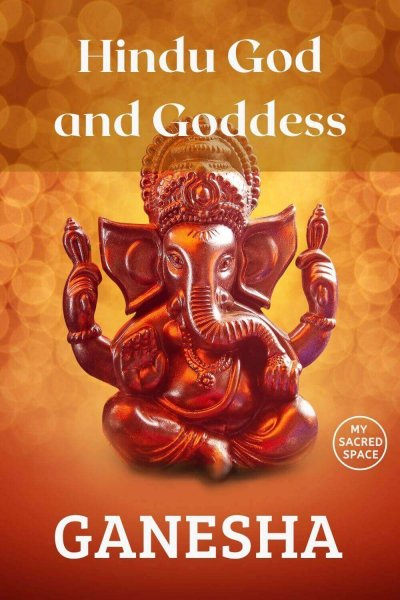 If you feel attracted to the energy of Hindu God and Goddess Ganesha, listen to your inner voice.

We have responded to most asked questions here.

But do not forget, the responses to any of your questions are inside you.

So yes, read and get inspired but still ask yourself your questions and trust your inner voice when you get the answers.

At the end of the blog, there is a YouTube video with the singing of the Ganesh mantra.

Maybe reading this article while listening that music can help you to connect. Just a tip 🙂

What is Ganesha the goddess of?

Ganesha is the God of new beginning, wisdom, and success.

He is also worshipped as the remover of obstacles.

That’s why many Hindu business persons create temples in their houses for good fortune and success in Business.

One of the popular Sanskrit Ganesha slokas is:

Ganesha is also worshipped by the name “Ganapati” or “Vinayaka.” He is the second son of Shiva and Parvati.

Kartikeya, who is the God of war, is the brother of Lord Ganesha. However, some Hindu Puranas explain Ganesha’s differently.

For instance, a story tells that an elephant-headed by Goddess Malini gave birth after drinking water from Parvati’s bathwater.

Malini threw away Ganesha in the water and later Shiva and Parvati found him.

Whatever the origin is, every story leads Ganesha to Shiva and Parvati.

That is why people revere Lord Ganesha as the son of Shiva and Parvati throughout the world.

Who is the wife of Lord Ganesha?

Similar to Ganesha’s parents, the recognition of his wives also differs across Hindu mythologies.

Nonetheless, the Shiva Purana tells a great story of his marriage.

I loved the story as it also explains why he is the God of wisdom.

Below, I have narrated the story for you:

Once Shiva and Parvati were discussing Ganesha and Kartikeya’s marriage. They let their sons know what they were thinking.

Learning about their parents’ wishes, Ganesha and Kartikeya both wanted to marry first.

So, Shiva and Parvati reached a solution and told their sons that whoever travels around the world first will be married first.

Kartikeya instantly started his Journey but Ganesha did not.

Instead, Ganesha requested his parents to sit in a place.

Ganesha said to his parents that according to Vedas,

“He who worships his parents and circumambulates them, will certainly derive the fruits and merit of circumambulating the earth.

And he who leaves his parents at home and goes on a pilgrimage incurs the sin of their murder.”

So, Ganesha claimed to have completed the task first and requested them to get him married.

Shiva and Parvati were impressed by Ganesha’s intellect and excellence. They decided to marry him to two daughters of Prajapati Vishvarupa or Vishwarupa.

Ganesha got married to Siddhi (spiritual power) and Buddhi (intellect).

They were Ganesha’s two wives and gave birth to two sons.

At the same time, some Puranas also recognize Ganesha as a lifelong “Brahmachari” or bachelor.

Is Ganesha a male or female?

The stories above represent Ganesha as a male God in Hindu mythology.

But a few people know that Ganesha also had a feminine form.

The reason why not many people are aware of this is because of the lack of information.

There isn’t much written document on her and most of Ganesha’s feminine stories are oral.

Is Ganesha a deity or god?

Male or female, there is no doubt that Ganesha is one of the most worshipped Gods in the Hindu religion.

Now many people ask if Ganesha is a deity or a God. Well, he can be referred to as both.

That’s because usually both of these terms are used as synonyms.

Lord Ganesha has supreme powers, which means he is a deity.

Besides, his powers are unique, which is why people worship him, which means Ganesha is a God too.

Now many people also ask, “Is Ganesha good or evil?”

The above explanation answers this question too. I mean he is good and that is why people revere and worship him.

Or else it would have been the opposite. Right?

Hindus also believe he can remove any obstacle on the way to success. If you worship him, he will definitely help you with his unique Godly powers.

If you are wondering what are his powers, below I have explained more about them:

What are the powers of Ganesha?

As the God of good fortune, prosperity, wisdom, and the remover of obstacles, Lord Ganesha’s powers are more associated with intellectual ability rather than physical abilities.

Lord Ganesha has excellent wisdom that can help you in any difficult situation.

His power of knowledge is also said to bring wealth in life. If you are having any hindrances towards your goal, Lord Ganesha may help you.

Every year, his followers celebrate Ganesha Chaturthi for ten days to show their devotion to him.

In the Gregorian calendar, the festival falls between 22nd August to 20th September every year.

However, every God in Hinduism has its unique weapons. Lord Ganesha’s weapons are, Paraśu (axe), pāśa (noose), aṅkuśa (elephant goad).

What does the Ganesh elephant symbolize?

That applies to Lord Ganesha too.

The most common depiction of Ganesha is the one with an elephant head. It is a matter of discussion for many.

I also wondered what this symbolizes?

Well, I have encountered some amusing interpretations, which I am sharing with you:

Usually, elephants act as path makers in forests with their massive figures.

They stay in the front and remove the obstacles, which create paths for other animals.

That’s why Hindus revere Ganesha before starting anything new and believe him to be the remover of obstacles.

Commonly the massive belly of Ganesha represents the world created.

Besides, the elephant head symbolizes Gyan or knowledge or wisdom.

The large elephant-like ears are the symbol of the importance of listening to others to assimilate ideas.

Ganesha’s left tusk represents emotion and the right one refers to wisdom. The left one is a little broken.

It tells you that you must conquer your emotions with wisdom.

Only then you can lead a perfect and successful life.

You can get the advantage of Lord Ganesha’s power by calling him with his mantra.

A mantra is a sacred sound, words, or group words believed to have religious, spiritual power.

The Ganesha mantra is:

“Lord Ganesha, I offer my prayers to you,

My salutations to Lord Ganesha.”

Besides, you may also chant different Ganesha slokas to call on the power of Lord Ganesha.

I have shared one above and here is another one:

“O Lord Ganesha, you having a Curved Trunk, Large Body,

possessing the Brilliance of a Million Suns,

Please remove all obstacles to my work, at all times.”

There are many different paths.

All the entrance points of all these paths are via our hearts.

Connect to whatever your heart is telling you to connect. Come here and now.

Feel and find the divine inside you!

Below is a Pinterest friendly photo so you can pin it to your Hindu Gods and Goddesses Board!