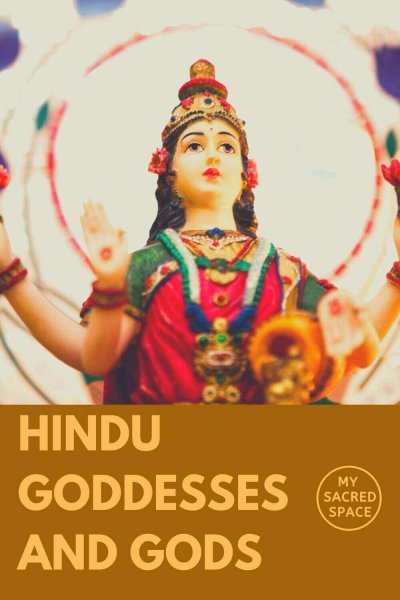 The Veda is the central scripture of Hinduism, and all Hindu castes are bound to follow it.

It tells everything about the Hindu Goddess and Gods.

Like all other religions, Hindus also have a supreme God.

All other Gods have originated from him or the avatar of him.

I have tried to explain everything in detail throughout the article.

Hindu mythologies have some of the most complex and interesting god and goddess stories.

Many of you, including Hindus, may get confused with all the Gods.

However, they are not as confusing as you think. It is only a lack of proper knowledge.

When I started to read different Hindu God and Goddess stories, I was able to differentiate them and clear all my confusion.

Ramayana and Mahabharata are two of the books you can read to know about all the Hindu Goddess and God stories.

Who is the god of Hindu?

Brahman is the highest universal principle and the supreme God of Hindus.

He is the reason for the existence of everything in this universe.

The oldest layer of the Vedas dated to the 2nd millennium BCE., mentions the Brahman as limitless. One of the verses is:

The Samans are limited,

And the Yajuses are limited,

But of the Word Brahman, there is no end.

Different people interpret this verse in many ways.

According to my understanding, “there is no end” refers to the endless power of the Brahman.

The supreme God Brahman can perform uncountable divine functions, such as creating or destroying the whole universe.

As God is formless, Brahman is often referred to as the “Atman.”

It means “eternal self” – the true self beyond ego or any other false self.

The term also refers to the meaning that Brahman is above all.

Who are the 3 main Hindu gods?

When Brahman is above all, there is a further concept of the Trimurti or Tridevas in Hinduism.

They are also known as the Trinity, which refers to the three main Hindu Gods representing the Brahman.

These three Gods are Brahma the creator, Vishnu the Preserver, and Shiva the Destroyer.

The universal rule of life consists of creation, existence, and destruction or end. Brahma, Vishnu, and Shiva are the Gods maintain that cycle for the universe

Below I have explained more about these three main Gods of Hindu:

“Look upon the face of Nature

In the flush of June;

BRAHMA is the great Creator,

Brahma is the first God of the Trimurti, and according to Hinduism, he created the whole cosmic universe.

Some other popular names for Lord Brahma include Prajapati, Vednatha, Hiranyagarbha, etc.

Vishnu is the second god in the Trimurti, also known as Narayana and Hari. He is the God of Preservation, Karma restoration, and reality.

There are some minor mentions of Vishnu in the Rig Veda. One of the verses is:

“Might I reach that dear cattle-pen of his, where men seeking the gods find elation, for exactly that is the bond to the wide-striding one: the wellspring of honey in the highest step of Viṣṇu.”

This is the Mantra of the Hindu God Shiva. He is known as the God of Destruction, Meditation, and Yoga. The belief is that Lord Shiva destroys evil.

Shiva means “The Auspicious One.” He is also known as Mahadeva, which means “The Great God.”

Though he is considered as the destroyer in the Trimurti, Shaivism (one of the major sects of Hinduism) believes that Shiva is the all-in-one creator, the preserver, and the destroyer.

Who are the Hindu goddesses?

Hindus believe that the divine comprises both feminine and masculine attributes.

Saraswati is the consort of Lord Brahman.

She is popular in Hinduism as the Mother Goddess.

Hindus worship Saraswati as the Goddess of Knowledge, Music, and Wisdom.

Then Lakshmi is the consort of Lord Vishnu and the Goddess of Fortune, Power, Beauty, and Maya.

Lastly, Parvati, the consort of Lord Shiva, is the Goddess of Energy, Motherhood, Devotion, and Love.

How many Hindu gods and goddesses are there?

So, are Hindu Goddess, and Gods are only these three?

Well, the answer is no. You must have heard of 330 million Gods of Hindus.

However, when I started to read Hindu God and Goddess stories, I came to learn there are mentions of thirty-three Gods in Vedic literature.

And here, Koti refers to the Supreme.

Below is more information about these thirty-three Gods in Hinduism.

Who are the main Hindu gods? (Hindu god and goddess list)

The concept of thirty-three Gods originated from Vedic mythologies.

However, it includes a set of thirty-one Gods in three divisions.

The identity of the other two Gods varies in different literature.

Adityas, Rudras, and Vasus are the three divisions of Gods in Vedic culture. The list of these Gods is below:

Not to mention, the names often vary due to diverse languages and sects in Hinduism.

There is also a long list of Devis and Goddesses in Hinduism. Some of the popular ones are:

The list is mainly based on the Shaktism sect of Hindu.

How to identify Hindu gods?

However, if you have proper knowledge of them, it isn’t that challenging.

Here I am mentioning how to identify the Trimurti; besides, you can read “In a World of Gods and Goddesses” for more.

Vishnu also has four hands, but only one hand. He usually appears in dark-blue or blue-grey color.

And Shiva often appears with a snake around his neck.

His iconography in the form of dancing is also heavily popular in Hinduism.

This is just a starting article.

Below is a Pinterest friendly photo…. so, you can pin it to your Hindu Gods and Goddesses Board!