How Many Chakras Are There in Your Body Really? 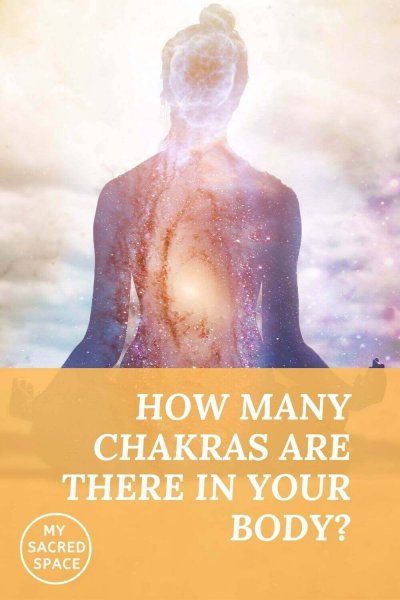 Lately, we talked about if chakras are real and what are they really and now there is another question about chakras, how many chakras are there in your body?

The Chakra system has been around even long before 1500 BC in the oral tradition of India. It is being said that there are around 80000 chakras in our body but then there are some emphasis on 114 chakras as well as 7, 8, and 10 chakras.

The Chakra system is like learning a language. Each chakra is coming with a set of the essence, meaning that when you are balanced, you can reflect these essences on yourself. You can be in harmony and aligned with the universe.

So let’s begin to dive deeper into the universe of the chakras. Join me!

How many chakras in the body?

Chakra (spiral circles) are foci of opening to awareness levels. They are in the energy body, not in the physical self.

Our energy body is our bluish etheric shadow body that surrounds the physical body. It is the electromagnetic body between physical and metaphysical reality.

It is the area that enables the circulation of enlightenment, of inner light.

Shaman Ayşe Nülgün Arıt explains the number of chakras in our bodies as such;

“In the Hindu period, there are 7 chakras associated with Mercury, Venus, Mars, Jupiter, Saturn, Sun, and Moon. There are 10 in Mu and Atlantis periods when Uranus, Neptune, and Pluto are known. In catastrophe, when the Earth’s solar orbit and polar axes changed, they went dormant and woke up this century.”

What are the 10 chakras and what do each of the chakras do?

There is a focus on 7, 8, and 10 basic chakras. First, let’s check what these chakras do simply.

What are the 8 energy centers?

Two of the 10 chakras represent polarity/holism on the top of the head and below the soles. They are the terminals connecting the cosmic and the material.

The crown chakra elevates the head like a crown. The base chakra is essentially the one below the base, and it connects and grounds us to our Mother Earth.

The 8 chakras of the body work as octaves by the universal law of harmony (Healing circle and eastern mandala system).

Streams of energy from the Cosmos (Sun, Moon, Stars, and Planets) descend in waves from the energy body.

Where chakras are in the body?

The description of their place in the body is for lack of knowledge or convenience. It is the projection of their positions in the energy body onto the physical body.

What are the colors of each chakra?

Chakras are meditation aids. People are visualizing them during their meditations. It is quite common to visualize them with their specific color. Whereas it is important to emphasize that the color correlation of chakras is a very new concept. You are free to correlate any color that you feel like to each of your chakra.

Ok so far we have talked about 10 and 8 chakras but maybe you have also heard of 114 chakras, right?

N.J. Cooper mentioned in his article: ‘A Brief History of the Chakras in Human Body’ as in below:

“In the western world, we are familiar with the seven primary chakra systems. However, in the oral tradition of the chakra system, particularly, in the tradition of Sri Amit Ray, the chakras are not limited by seven or twelve; it goes beyond 114 chakras.

Origin of 114 Chakra System There are seven main chakras along the spine. However, according to Sri Amit Ray, there are as many as 114 all over the body. In 2018, Sri Amit Ray rediscovered the 114 chakras in the human body based on his profound meditation experiences and oral tradition. He identified the names, locations, and functions of all the 114 chakras for the first time. Ray designed 21 chakra pathways for deep meditation. They are designed to aid accuracy in meditation and the transmission of the healing energy and for the transformation of the soul.”

If you want to dive deeper with 114 chakras, Amit Ray has a well-known book about the topic Ray 114 Chakra System Names, Locations and Functions and also courses for those who want to get deeper information.

As you see we are hearing different numbers around 7, 8, 10, 21, 114, and many more. Chakras have been understood and elaborated in different civilizations around the globe. So we are having different information about the numbers but still, they are not contra to each other.

If you are interested in the topic, you can also check these articles:

Is Chakra a Real Thing and What Are Chakras Really?

Below is a Pinterest friendly photo…. so, you can pin it to your Chakras Board!