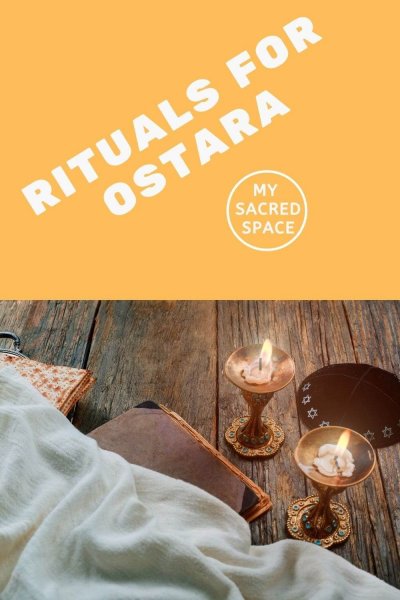 How can one connect to the blessings of Ostara energies? The answer is simple; by rituals. That is why I have created different articles related to Ostara’s rituals.

After reading these two books, I have written a series of articles related to Ostara.

Celebrating the Seasons of Life: Samhain to Ostara: Lore, Rituals, Activities, and Symbols by Ashleen O’Gaea (check here for the UK and here for the US)

Many of the ideas in these articles are inspired by these two books, which I am grateful to the writers.

The four articles I wrote about the Ostara are:

Ostara What to Do

Check them and connect to this magical time of the year.

How to honor and worship Ostara?

One of the worshippers of Eostre was a little hare who was eager to make a gift to his goddess, but he did not know what he could offer her that would be of value to her.

While foraging for food, the hare came across a fresh egg, a precious commodity.

The little rabbit was eager to eat the egg, for it had been a long time since he had eaten anything more pleasing than dry grasses.

Before he could take a bite of his prey, he realized that this egg might be the perfect gift for Eostre.

But, he reasoned, Eostre could have as many eggs as she wanted, whenever she wanted them.

She was a goddess, a creator, the embodiment of life itself.

Just giving her any egg would never be enough.

How, he wondered, could he make this egg an appropriate gift for his goddess?

The little rabbit took the egg home and thought about how he could make it as beautiful and new as Eostre creates the world anew each spring.

He began to decorate the egg. He painted it with the colors of Eostre’s spring forests and put symbols on the shell that were sacred to Eostre.

When he felt that he could not make the egg more beautiful, he took it to Eostre and gave it to her as a gift.

Eostre was so pleased that the little rabbit offered his egg to her and how he decorated it for her.

She wanted everyone – especially children, who are themselves symbols of new life- to enjoy these representations of her gifts.

Since that Ostara day long ago, the descendants of the hare have taken on the task of bringing decorated eggs to the world’s children in the spring.

They are called Eostre’s hares or, more generally, the Easter Bunny.

Ostara, how to celebrate?

Rituals are part of all spiritual expressions.

Ritual patterns allow us to connect with archetypal patterns in the collective unconscious.

Repeated gestures, words, and patterns cause our unconscious to move in a particular direction and allow us to achieve the goal of the ritual, whether it be magick, connecting with the gods, or simply spending time opening ourselves to communion with nature.

Ostara for beginners: things to do for Ostara

The best way to connect with the Ostara energy is via rituals.

As the symbols of Ostara, we can do balance, purification, and rebirth rituals between many.

In this article, we will talk about balancing and purification rituals, and here , you can read more about rebirth rituals for Ostara.

Ostara falls on an equinox, one of the two points in the solar year when day and night are of equal length.

So it is a matter of balance.

Balance can mean something equally weighted, or it can be a metaphor for inner processes and feelings.

The equal-armed cross or the crossroads symbolize Ostara.

On Ostara, imagine standing in the center of a large cross.

Further, imagine that one arm of the cross is the day and the other is the night, with Ostara representing the midpoint where the two lines cross.

Whether in the spirit or on the physical plane, all rituals of transformation require personal cleansing or purification to prepare the body and mind for the task ahead.

These preparations play an essential role in the rituals for Ostara.

Spring has always been considered a time to purify the body and mind as they retreat into the outdoors after winter.

Purification can be done spiritually, with a bowl of water, incense, anointing with oils, or in a ritual bath.

There are few rules in Pagan spiritual practice.

Still, it is a given that you approach any spiritual ritual in the inner world both mentally and physically cleansed so that you are in a receptive and respectful state to connect with the deities.

Any feather is suitable for this spell, as long as it is not synthetic.

Instead, we will consider it in our magical mind as if it belonged to the robin since it is one of the symbols of Ostara time.

You will also need some incense with purifying magical properties, such as sandalwood, lavender, lemon, or cedar.

On Ostara morning, start your spring cleaning with a psychic cleansing of your home.

Light the incense in a portable container, either on a chain or in a heat-resistant bowl that you can carry.

Start in the center of your home and move counterclockwise outward while making sweeping motions with the feather.

Imagine the incense cleansing each room while the robin’s feather sweeps out the psychic stagnation of winter so that new magic can emerge.

As you go from room to room, chant something like the following:

Incense, fill this apartment for me, clean and clear it must be now;

Feather of the robin, emissary of the sun, banish winter, my spell is done.

Ostara: Customs, Spells & Rituals for the Rites of Spring by Edain McCoy

When your psychic spring cleaning is complete, stick the feather in the ground near your front door to bring the robin’s spring blessing from the young god into your home.

For this ritual, you need a place where you can bathe alone for at least fifteen minutes.

It can be a lake, river, pond, bathtub, or another private place.

You will also need a few drops of purifying oil such as sandalwood, lavender, verbena, hyssop, or rosemary.

You can also add or substitute dried herbs.

While running the water in the tub or standing on a riverbank or shore, focus on the goal of your ritual.

Allow yourself to connect with the energies of cleansing on all levels of body and mind.

Add the herbs or oils to the water while speaking an affirmation, such as:

Goddess of the Awakening Earth Herbs of earth and water and fire, make me holy and pure as I desire;

Cleanse me from the traces of mischief and disgrace so that I may speak the name of the deity.

Ostara: Customs, Spells & Rituals for the Rites of Spring by Edain McCoy

Step into the water and soak yourself.

As you do so, imagine the dirt on your body – physical, mental, and spiritual – being pulled out of you and flowing into the surrounding water.

As you drain the water from the tub or watch it flow downstream, know that these impure things are being taken away from you, leaving you pure.

The best way to connect with the magical Ostara energy is via rituals. Here we have talked about balancing and purification rituals, which is just a start.

Check our other articles to learn about rebirth rituals and other celebration ideas:

Ostara What to Do