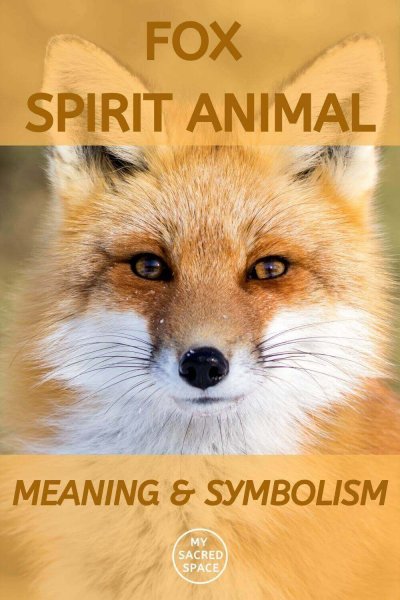 I have prepared for you a comprehensive guide about the physical and symbolical characteristics of the spirit animal Fox. However, before digging into detail, let us answer some questions you may have.

What is a spirit animal?

Spirit animal is animal energy that is guiding you in your life journey. Maybe you have heard of them as spirit animals or Nagual, power animals or animal spirits. You can get more information about spirit animal’s meaning here.

What is a Native American spirit animal?

Native Americans see life as a web, where each being is strongly related. In this web, animals have the role of guiding human beings with their wisdom.

For centuries people have gotten guidance from animals.

They created a relationship with them and asked for advice, especially in their shamanic journeys or via messages in the exterior world.

You can read more about my shamanic journey experience here.

To understand the messages of their spirit animal, it has been essential to get as much information about these animals as possible.

As the animals’ symbolic meaning and physical characteristics are related, it is a good idea to get information about every aspect of your spirit animal.

What are the traits of a Fox?

Fox is an intelligent, cunning, and joyful animal.

They are quick, silent, patient, and have been drawn fearfully.

Is a Fox dangerous?

Foxes are often considered pests or nuisance creatures for their opportunistic attacks on poultry and other small livestock. However, Fox attacks on humans are not common.

How often do Foxes attack humans?

Fox presents no danger to humans unless they are rabid, rare, or if they are being captured or handled. Many Foxes adapt well to human environments.

So why is there a fear of Foxes attacking humans or eating babies?

Maybe it is coming from the mythologies and stories such as Teumessian Fox in ancient Greece.

The story tells that the god Dionysus sends a giant Fox as punishment to eat the children of Thebes.

To defend the children, Creon, the leader of Thebes, sends a dog with special powers to catch the giant Fox.

Zeus then intervenes and turns both animals into stone and throws them into the sky, where they become the constellations Canis Major and Canis Minor.

Can you raise a baby Fox as a pet?

There have been many cases of the domestication of the Foxes.

Even though Foxes are animals adapting to the human environment quite a lot compared to many others, they are still free spirits.

They leave the families that have been domesticated in many cases.

I have found out a story about Celtic Fox and Brigid of Ireland, which also gives a lot of clues about the Fox symbolism for Celtics.

“In the Celtic tale, ‘Brigid and the Fox,’ Brigid of Ireland was known to be able to talk with the animals.

So Brigid went to intercede with the King of Leinster, who was preparing to take the life of the man who had accidentally killed his pet, Fox.

Brigid brought the king a little Fox and made the Fox do tricks to make the king happy.

Finally, she offered the king the Fox in exchange for the unfortunate prisoner’s life, and the king took the Fox to be his new pet.

But the Fox became unhappy living in the king’s castle without Brigid, and he escaped back to the woods.

The king’s men searched far and wide, but the little Fox could not be found again.

The Fox is always a wild creature – and can only be genuinely ‘tamed’ by Brigid.”

Although primarily nocturnal, one can see Foxes in suburban or urban areas during the day, as they love to play.

Why do Foxes scream at night?

Foxes scream and bark to communicate with each other as a territory warning, and female Foxes will make loud noises when mating.

Ok, after answering the questions around properties about the Foxes, now it is time to go around the meaning and symbolism.

Many books, movies, and songs have been created about the Foxes during human history, meaning that Foxes are important in our collective consciousness.

This article called The Fox in World Literature: Reflections on a “Fictional Animal” by Hans-Jörg Uther gives an excellent summary of the different meanings of Fox for humans.

As mentioned in Wikipedia

“A Tswana riddle says that “Phokoje go tsela o dithetsenya [Only the muddy Fox lives], meaning that, in a philosophical sense, ‘only an active person who does not mind getting muddy gets to progress in life.’

The Fox is usually depicted as a cunning trickster in Finnish mythology but seldom evil.

The Fox, while weaker, in the end, outsmarts both the evil and greedy wolf and the solid but not-so-cunning bear.

It symbolizes the victory of intelligence over both malevolence and brute strength. In Northern Finland, the Fox is said to conjure the aurora borealis while it runs through the snowy hills.

When Fox’s fur touches the snow, it creates magical sparks and sets the sky ablaze.

Still today, the Finnish word for the aurora is “revontulet” which translates to “Fox-fires.”

What does a spirit animal Fox symbolize?

I want to share my teacher’s words about the Fox symbolism from her book, with you.

“Fox animal spirit guides you to know yourself better in all physical, mental, and spiritual angels.

It shows you can interpret other people and your relationships with them accurately.

Fox teaches us to decide and act quickly.

So it would come when you should insist on some decisions, you need to be brave in your actions, and when your observations need to be sharp.”

Spirit animal Fox symbolizes being resourceful and open to innovation and creativity.

Foxes are clever and cunning animals.

When it is time to start new adventures, be creative, interpret better your relationships with others, and be gentle but at the same time quick, a Fox will come to you.

It would day you that you need bravery and sharp observation skills.

It is a balance of both masculine and feminine energies.

Therefore, if you lack feminine energies in life, your Fox spirit animal will give this balance to you.

In Chinese, Japanese, and Korean folklore, Foxes are potent spirits that often take on the form of female humans to seduce men.

This could be a symbol of this balance of masculine and feminine energies.

If you are having problems with your relationships Fox animal would come to you.

To say that, you need to learn to adapt without putting yourself forward and be patient with the high hiding ability of Foxes. You would learn to get what you want by being calm and silent.

In Little Prince by Antoine de Saint-Exupéry, we meet with the guidance of the Fox animal.

Fox is showing what is essential in life and says to the little prince:

“It is only with the heart one can see rightly. What is essential is invisible to the eye.”

“The time you spent on your rose makes your rose so important.”

“He was only a Fox like a hundred thousand other Foxes. But I have made him my friend, and now he is unique in all the world. You become responsible, forever, for what you have tamed.”

In this beautiful story, a Fox is the spirit animal telling the little prince that we are looking for far away, for what is in front of our eyes.

We do not know to listen, and as we do not learn how to love appropriately, we give importance to non-important things.

What does the spirit animal Fox represent in Native American culture?

The Moche people of ancient Peru worshipped animals and often depicted the Fox in their art.

The Moche people believed the Fox to be a warrior that would use his mind to fight. The Fox would not ever use a physical attack, only mental.

What happens if you see a Fox?

The meaning of animals crossing your path or a Fox staring at you can be the symbol of the Fox spirit animal is there to guide you.

So open your heart and be ready to receive the messages and guidance they brought to you.

Fox shows how to separate wrong from right and how to do it is trusting to heart to your intuition.

The shamanic perspective shows us the art of living with our intuitions so that we can be in harmony with life.

Check our other articles on the topic:

Below is a Pinterest friendly photo so that you can pin it to your Spirit Animal Board!