The symbolism of Phoenix: Phoenix symbolism in Buddhism, Hinduism, and Jainism 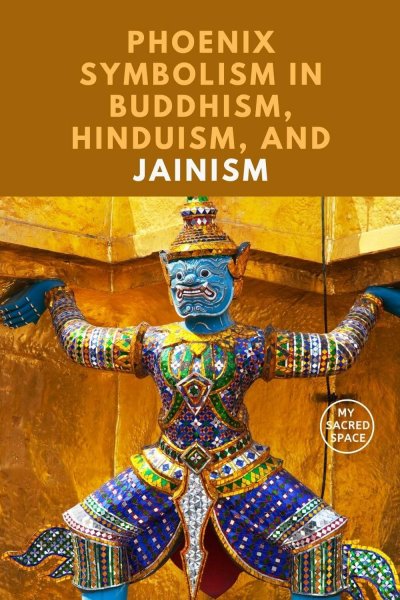 Garuda is a mythological creature in Asian cultures, and its fictitious stories have their place in Hinduism, Buddhism, and Jainism.

Lately, I was writing different articles about the symbolism of the phoenix, as you can see the articles below:

In this article, I invite you to discover Garuda Phoenix mythology and find the commonalities of the Garuda with the phoenix. So let’s start, shall we?

The Garuda is a humanoid creature with golden wings, sharp claws, and a snake in its beak.

Garuda flies through the sky.

Gruda’s wings make the sounds of the hymns of the Vedas.

According to the Indian Mahabharata, Garuda was born inside an egg.

It appeared as a solid and shining light to start the enormous cosmic disaster that occurred at the end of each era to destroy the Earth.

The Devas begged Garuda to shrink him in body and energy, fearing Garuda’s limitless power, and Garuda heeded their prayers.

According to legend, Garuda was so big that everyone confused him with Agni, the god of fire.

Is Garuda a phoenix?

Garuda is an analog of the phoenix and has similar symbolization with it and in Buddhism, Hinduism, and Jainism.

Is Garuda a hawk or eagle?

Garuda is described as a divine eagle-like sun bird and the king of birds.

What is Garuda the god of?

Garuda is not the god of but the vahana (mount) of the god Vishnu.

According to Hindu and Buddhist mythology, the movement of its wings caused a storm.

The shine of his feathers was so intense that it even outshined the glare of the sun.

He also could increase his strength as much as he needed.

Garuda was born of the sage Kashyapa and the mother of birds Vinata. Kashyapa also married Kadru, Vinata’s sister, who gave birth to a thousand snakes (the ancestors of all snakes living on Earth today).

Why Garuda and snakes are enemies?

One day, Vinata and Kadru made a trivial bet regarding the color of the tail of the Uchchaihshravas.

This seven-headed flying horse appeared during the churning of the Milky Ocean.

While Kadru claimed that the horse’s tail was black, Vinata thought it was white.

As a result of Kadru’s deception, Vinata lost the bet and became Kadru’s slave, and she and her snake sons mistreated Vinata.

Trying to stop his mother from suffering in this humiliating captivity, Garuda went to the snakes and asked what he should give them to buy his mother’s freedom.

The Nagas said that to free her mother, she must bring the Nectar of Immortality (Amrita), which the gods bravely captured from the depths of the ocean.

Garuda knew this would be a difficult task to accomplish, as the amrita elixir was protected by a sky-filling fire, sharp whirling blades, and two giant venomous snakes placed protectively next to the elixir.

But the mighty king of birds was not afraid.

He defeated them all and entered the area where amrita was stored and protected.

With the amrita pot in his mouth, he headed straight for the Nagas, who kept his mother under his control.

Then suddenly, he appeared before Vishnu, the great Hindu god who guards all things, one of the highest deities, usually depicted with blue skin and four arms.

They mutually promised each other, and Vishnu promised Garuda immortality without drinking from amrita’s cup.

Garuda agreed to serve Vishnu as his unique mount.

Garuda later encountered Indra. He said he would give the elixir to Indra after he delivered it to the Nagas.

Indra said that he would give the serpents to Garuda as food.

Reaching the lands of the Nagas, Garuda placed the pot containing the potion on the grass.

Immediately demanded that they release his mother Vinata and perform the necessary religious rites before drinking the amrita.

While the Nagas were busy with their rituals, Indra quickly took the vessel full of amrita.

When the snakes returned, they were shocked to see that the potion had disappeared and the pot was not there as they tried to lick the spilled drops of amrita on the ground.

(There is an interesting commonality with the Gilgamesh epic here. After getting the immortality plant in the middle of the ocean, Gilgamesh put it on the grass while he rests, and the snakes eat it there.)

Legend says that this is how the tongues of snakes (Nagas) split in two.

When Garuda fulfilled the task and amrita returned to the gods, he fulfilled his promise to Vishnu.

From then on, Garuda became closely related to Vishnu, and in addition to Vishnu, his wife Lakshmi also used Garuda as a mount (‘vahana’).

What does the Garuda bird symbolize?

Garuda appears in many traditions and stories, especially in Java and Bali. In many stories, Garuda symbolizes the virtue of knowledge, power, bravery, loyalty, and discipline. As the vehicle of Vishnu, Garuda also bears the attributes of Vishnu, which symbolize the preservation of cosmic order.

Garuda’s links to Vishnu – the Hindu god who fights injustice and destroys evil in his various avatars to preserve dharma, have made him an iconic symbol of king’s duty and power, an emblem of royalty or dharma.

His eagle-like form, either alone or with Vishnu, signifies divine approval of the state’s power.

You can find Garuda on the faces of many early Hindu kingdom coins with this symbolism, either as a single-headed bird or a three-headed bird that watches all sides.

Throughout the Mahabharata, Garuda was a symbol of impetuous violent force, speed, and martial prowess.

Defeated warriors are like snakes beaten down by Garuda.

Krishna even carries the image of Garuda on his banner.

Garuda invites us to find out the meaning of immortality as in Gilgamesh’s epic.

These mythologies are entering our lives when we listen to them and slowly open up their secrets to us if we are willing to reflect on them.

If you are interested in this article, definitely these articles below would take your attention as well. Feel free to enjoy: