The symbolism of Phoenix: Phoenix symbolism in China, Japan, Georgia, and Slav Mythology 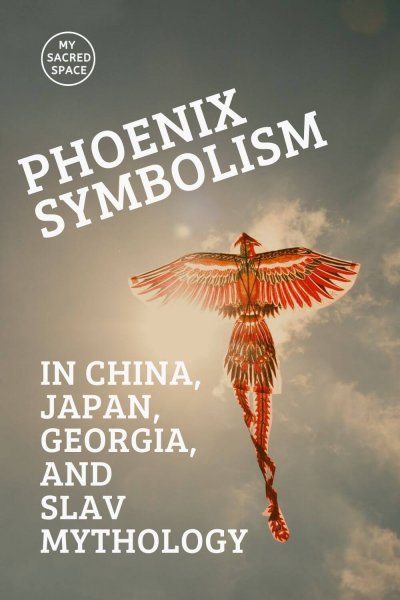 You are here maybe because the phoenix is your spirit animal. Searching for its symbolic meaning, or perhaps you have just found out that your Egyptian horoscope is the phoenix.

Or maybe your horoscope is a scorpion, and one of your totem animals is a phoenix, which is why you are here.

Maybe totally another journey yours is.

Whatever your adventure is, you are here because looking for the symbolism of the phoenix in the Asian, Balkan and Slavic cultures.

So, I kindly welcome you to My Sacred Space Blog. I honor your intention, whatever it is because whenever phoenix enters your intuition, it has a reason for it.

To understand what I mean, you can check the articles here as well:

Let’s start the symbolic exploration of phoenix in China via Fenghuang and Zhuque, in Japan via Hō-ō in Russia with Firebird and Georgia with Paskunji. Join me in this incredible journey!

Fenghuang and Zhuque are the birds related to phoenix in Chinese culture.

Fenghuang has a rooster’s beak, the face of a swallow, the forehead of a fowl, the neck of a snake, the breast of a goose, the back of a tortoise, the hindquarters of a stag, and the tail of a fish.

Today, however, it is often described as a composite of many birds, including the head of a golden pheasant, the body of a mandarin duck, the tail of a peacock, the legs of a crane, the mouth of a parrot, and the wings of a swallow.

Fenghuang is a mythological bird that reigns over all other birds.

The males were initially called Feng and females Huang, a symbol of yin and yang.

According to Wikipedia, such a distinction of gender is often no longer made.

Instead, they are blurred into a single feminine entity so that the bird can be paired with the Chinese dragon, traditionally deemed male.

However, since the Qin dynasty, the Fenghuang progressively went through a feminization process as the dragon became a symbol of masculinity.

The bird was attacking the snakes with its wings and talon (common point with Hindu Garuda mythology. See the blog post here)

The Fenghuang is said to have originated in the sun.

It sometimes carries scrolls or a box with sacred books. Sometimes a fireball.

The bird only appears in sacred places with utmost peace and prosperity or happiness.

Chinese tradition cites it as living atop the Kunlun Mountains in northern China. (commonality with the Simorgh mythological bird residing in the Qaf mountain. See the blog post here.)

Fenghuang has positive symbolization such as virtue and grace as well as the union of yin and yang.

The first chapter of the Classic of Mountains and Seas, the “Nanchang-jing,” states that each part of Fenghuang’s body symbolizes a word:

In Disney’s film published in 2020, Mulan, the Phoenix Fenghuang, appears as Hua Mulan’s self-guide, leading her to the right path.

Another bird related to the phoenix in Chinese culture is Zhuque.

Zhuque is a mythological spirit creature and called a vermilion bird.

It is one of the four symbols of the Chinese constellations, and it represents the fire element, the direction of the south, and the summer season.

Garuda is a red bird in flames. It also exists in Japanese, Korean and Vietnamese cultures.

What does the phoenix represent in Japanese culture?

In Japanese culture, the phoenix is related to Hō-ō.

It is the combination of the female “ho” and male “oo.”

Its interpretation is that the new era will soon begin when people see the bird.

It has commonalities with Feng Huang in Chinese mythology. It symbolizes the sun, justice, and loyalty.

In the Pokémon anime, Ho-oh is a bird-like Fire Pokémon that can restore Pokémon’s life.

It is the one that created Suicune, Raikou, and Entei by rebirthing three nameless Pokémon that died in a fire at a tower that is known now as Burned Tower.

This setting in pokemon anime reminded me of two things.

First of all, three phoenixes of paradise take place On the Origin of the World from the Nag Hammadi Library collection, as I have mentioned here, and secondly, the (XVI’s card of the tarot: tower card.

Hajo Banzhaf, in his book Tarot and the Journey of the Hero, explains the tower card as such:

“After the hero has succeeded in forcefully entering the underworld, the important thing is to liberate now the lost treasure, the soul that has been sold, or whatever is held prisoner here from the power of the adversary.

This task corresponds to The Tower. It represents victory over the guard, killing the dragon, the sudden bursting open of the prison, freeing the captive soul, and pushing open the gates of the underworld.”

Firebird or Zhar-ptitsa is related to the phoenix in Slavic mythology.

Its feathers were gold and silver, eyes shining like crystals, and one could see it on a golden resting place.

It was as big as the peacock and was eating golden apples.

At night when it was flying, it could light all the fields, and it’s one feather was enough to light the whole room.

In the stories, it is a vital prime.

As the Firebird was eating the apples of the king, it needed to be caught. So the heroes were going on long and dangerous journeys to find the Firebird.

Besides, at the end of the journey, heroes get only a feather from the bird.

The Firebird is a marvel, highly coveted, but the hero, initially charmed by the wonder of the feather, eventually blames it for his troubles.

The Firebird tales follow the classical scheme of a fairy tale.

The feather serves as a suspicion of a challenging journey. Magical helpers met on the way who helped travel and capture the bird—returning from the faraway land with the prize.

There are many versions of the Firebird story as its source is an oral culture.

According to the Rustaveli Tripod website, Paskunji is a phoenix-like being who helps heroes and humans.

He lives in the underworld and fights the serpents there.

Heroes summoned him by burning one of his feathers, and he could transport them to other places and heal wounds and illnesses.

In contrast, in certain other myths, paskunjis are portrayed as being hostile to humans and persecuting them.

Phoenix is trying to tell us something profound.

And maybe its message is different each time.

It is one of the important symbols of our collective unconscious.

If he comes to you, it is for a reason.

Erase your doubts and appear fully in front of a phoenix, Fenghuang and Zhuque, Hō-ō, Firebird, and paskunji.

However, you prefer to call it.