The symbolism of Phoenix: Phoenix symbolism in Egypt, Greek, and Christianity 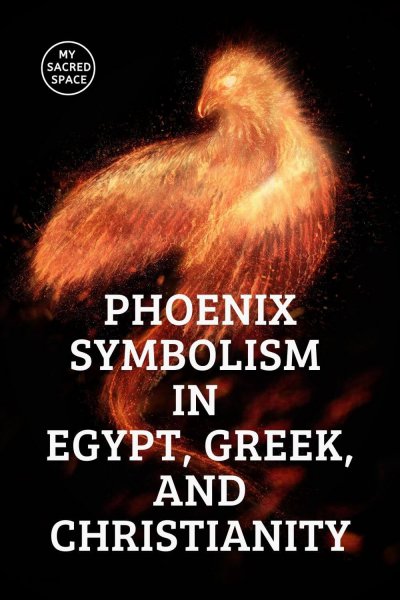 This symbolization is so powerful; that we see a similar bird related to the phoenix in many cultures.

You can ask what the symbolism of the phoenix is and what does phoenix represents.

My answer to this question is inviting you to a journey to discover different analogies of phoenix in different cultures.

What do I mean?

Phoenix in Egypt and Greece, Garuda in Hindu and Buddhist tradition, firebird in Slavic mythology, the Persian Simurgh, the Georgian paskunji, the Arabian anqa, the Turkish Konrul, also called Zümrüdü Anka (“emerald anqa”), the Tibetan Me byi Karmo, the Chinese Fenghuang, and Zhuque, and the Japanese Hō-ō.

Dive deep in the symbolic adventure of the phoenix with me while traveling different parts of the world.

It is so cool to discover commonalities on the way.

You can read these articles related to the topic in search of the symbolism of phoenix:

Phoenix is the legendary bird in Egyptian mythology, believed to live in Etiopia, and is related to worshipping the Sun.

It is a heron bird known as benu.

Rarely also told with the form of an eagle.

Phoenix has a relationship with Sun God Ra and would be reborn from its ashes after living for 500 or 1000 years.

Because of that, Egyptian Phoenix is composed of golden yellow and shiny red.

It is dying every night and is born each morning again; it symbolizes sun, immortality, and resurrection.

The word phoenix occurs in the Gnostic manuscript On the Origin of the World from the Nag Hammadi Library collection in Egypt, generally dated to the 4th century.

“Thus, when Sophia Zoe saw that the rulers of darkness had laid a curse upon her counterparts, she was indignant.

And coming out of the first heaven with full power, she chased those rulers out of their heavens and cast them into the sinful world, so that there they should dwell, in the form of evil spirits upon the earth.

[…], so that in their world it might pass the thousand years in paradise—a soul-endowed living creature called “phoenix.”

It kills itself and brings itself back to life as a witness to the judgment against them, for they did wrong to Adam and his race, unto the consummation of the age.

Therefore, there are […] three men, and his posterities, unto the completion of the world: the spirit-endowed of eternity, and the soul-endowed, and the earthly.

Likewise, there are three phoenixes in paradise—the first is immortal, the second lives 1,000 years; as for the third, it is written in the sacred book that it is consumed.

So, too, there are three baptisms—the first is spiritual, the second is by fire, the third is by water.

Just as the phoenix appears as a witness concerning the angels, so the case of the water hydri in Egypt, which has been a witness to those going down into the baptism of a true man.

So again, the two bulls in Egypt possess a mystery, the Sun and the Moon, being a witness to Sabaoth: namely, that over them Sophia received the universe; from the day that she made the Sun and Moon, she put a seal upon her heaven, unto eternity.

And the worm that has been born out of the phoenix is a human being as well.

So it is written concerning it, “the just man will blossom like a phoenix.” And the phoenix first appears living, and dies, and rises again, being a sign of what has become apparent at the consummation of the age.”

Even in Greek times, Egypt was considered a place where immortality and rebirth could take place, where the people greatly valued life and preserved it.

While the Greeks believed in the immortal soul, the Egyptians had much more bright ideas about death and the afterlife, where ordinary people, if knowledgeable and blessed, could join the gods in the heavens.

In Egyptian culture, one of the great metaphors for death and rebirth was the sun, the golden boat crossing the sky, devouring the earth, and rising again the following day.

The phoenix, being a fiery avian, is a solar symbol as well.

As both birds and the sun were considered symbols of rebirth and transcendence, they became associated in Ancient Egypt; hence the Sun Falcon Ra, the personality or Ba depicted as a bird, and the solar, creator Ibis Bennu.

Bennu’s temple in Heliopolis is the residence of the phoenix.

So, Herodotus is conveying key Egyptian motifs as embodied in the Bennu.

In Greek mythology, the phoenix is living in the land of Abyssinia.

It is as big as an eagle and has been living for long, long years.

It has eyes as shiny as stars and has a crest on its head.

The feathers on the neck are gilded, and all others are red.

When realizing that it is time to die, he makes a nest by plastering dry branches with glue and lies on it.

Then the sun creates a fire, and the phoenix burns and is reborn from its ashes.

As a result, an egg appears, and from the egg, a new phoenix.

Greeks believed that the phoenix is one of the appearances of the sun God Apollon.

Its feathers were the red of the fire, light blue, dark red, and golden yellow.

While this bird was traveling to Egypt, a group of other birds was joining to phoenix.

In ancient and medieval literature and art, the phoenix had a halo, emphasizing the bird’s connection with the sun.

In the oldest images of phoenixes on record, these nimbuses often have seven rays, like Helios (the Greek personification of the sun).

In another myth, the temple priest, who saw the bird that took his father’s body to the temple of the sun city Heliopolis in Egypt, was convinced that this bird was a phoenix by looking at the holy book would burn the dead phoenix’s body.

“The Phoenix is an anonymous Old English poem. It is composed of 677 lines and is, for the most part, a translation and adaptation of the Latin poem De Ave Phoenice attributed to Lactantius.

The beginning of The Phoenix describes the Garden of Eden as a Paradise, meant only for believers, in “eastern lands,” of sweet smells and means of extremes; the weather is mild: it never snows, rains, nor is the sun hot.

There are no distinguishing geographical features whatsoever, like mountains or valleys.

However, the “plain,” as the poem refers to the Garden, is resplendent with blooming foliage that never dies.

There are no extreme emotions in this environment: no death, sickness, or misery, but on the flip side of that coin, readers feel that there are no intense positive emotions.

The second part of the poem becomes allegorical.

The bird symbolizes Christ’s death and resurrection, his ability to return and raise the dead and take the living followers on the flight to the phoenix’s beautiful home (Paradise).

The phoenix also symbolizes the faithful followers through the baptismal altar where the sinful self dies, and the new hope within Christ comes to life.

There may be, as well, two more possible symbols of the bird, as Carol Falvo Heffernan discusses, that the phoenix represents the Virgin Mary and the Catholic Church.

The subject approached mainly by scholars when critically assessing The Phoenix is the absence of pagan names and details.”

The Phoenix and the Turtle is an allegorical poem about the death of ideal love by William Shakespeare.

It is widely considered one of his most obscure works and has led to many conflicting interpretations.

It has also been called “the first great published metaphysical poem.”

Phoenix and turtle dove are in love, and then they die, and the poem describes a funeral arranged for the deceased Phoenix and Turtledove, respectively emblems of perfection and devoted love.

What does the phoenix represent in Harry Potter?

In the Harry Potter film series, Dumbledore has a pet Phoenix named Fawkes.

Fawkes was a knowledgeable male phoenix and Albus Dumbledore’s animal companion and defender.

Following Dumbledore’s death, Fawkes sang his Lament over the Hogwarts School of Witchcraft and Wizardry grounds and then left and flew away.

His tail feathers were the cores of the two twin wands which Lord Voldemort and Harry Potter held.

Immortality has been a common point in many civilizations and cultures. Phoenix is again showing us the symbol of immortality. As we human beings worldwide sharing this desire in our hearts, we follow the phoenix’s guidance.

But then another question appears, what is immortality? Where the journey that the phoenix is inviting us is leading us?

If you are interested in the symbolism of the phoenix, these below articles can also be in your interest: