Unique Rituals For New Year Around the World 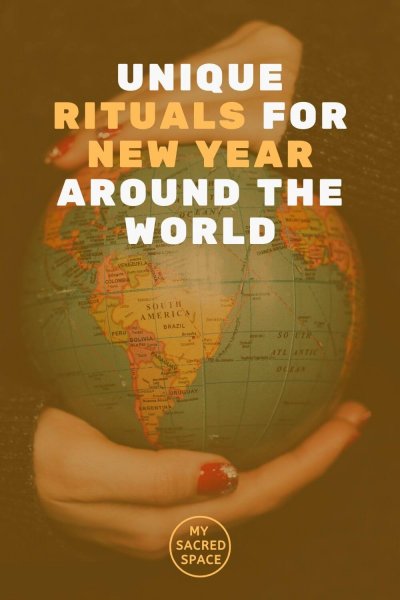 People celebrate the new year in different ways all around the world. I will share with you the unique rituals for the new year.

So that you can get inspiration and enrich your new year rituals.

Unique new year traditions and celebrations around the world

#1. Scrying with lead pouring in Germany

In Germany, on New Year’s Eve, families use lead pouring for scrying reasons to see what the new year holds for them.

Families and friends will gather around, melt a small piece of lead on a spoon over a candle and then drop the molten lead into a bowl of cool water.

The lead hardens almost immediately, and its shape helps your scrying.

In Scotland, the “first-foot” tradition has different varieties. Here is my favorite:

People close all the lights in the house at midnight, except for a single candle flame.

Somebody from the house goes outside with the candle and must prevent the flame from extinguishing.

Then that same person comes in as a “guest.” Everybody welcomes.

The “guest” then goes around the house and uses the candle to ceremonially relight the home as a symbol of the sun’s return.

#3. Connecting with spirit guides in Brazil

In Brazil, on New Year’s Eve, people wear white and throw white flowers and candles into the ocean to offer Lemanja, Goddess of the Sea.

It is believed that Lemanja brings prosperity to the new year.

#4. Getting the power of 7 people in Estonia

In Estonia, it is believed that if a person eats seven meals during New Year’s Eve, he will get the power of 7 people.

In Buddhist temples in Japan, to dispel the 108 evil desires in every person and cleanse the previous year of past sins, they ring 108 bells. 108th bell strikes midnight.

#6. Drinking your wishes in Russia

In Russia, on New Year’s Eve, people write their wishes to the papers, burn them, get the ashes inside the champagne and drink it.

New year traditions in the Philippines

In the Philippines, objects with round shapes symbolize fertility, reminding of gold coins.

That’s why round fruits are placed on the tables on New Year’s Eve.

Then, when the clock shows exactly 00.00, these fruits are eaten.

In Mexico, lentils are good luck providers. On New Year’s Eve, people eat lentils or give them to their friends and family for good luck.

Moreover, colors have importance in new year’s traditions in Mexico.

Chinese rituals for the new year

Before the New Year’s celebrations, the Chinese people clean their homes to remove bad luck from last year.

Moreover, they buy new flowers for their homes so that the new year will pass in luck and abundance.

If you ask how I can bring good luck on new year’s, let’s look at different luck rituals around the globe.

It is believed that if you jump over seven waves while entering the new year in Brazil, you will have good luck in the new year.

In Chile, it is believed that those who eat a spoonful of lentils when the clock strikes midnight will be full of work and money.

In Greece and Turkey, pomegranates are the symbols of prosperity and abundance. As a result, there is a tradition of breaking a pomegranate on New Year’s Eve.

Breaking a pomegranate means that the year will pass in abundance and fertility.

It is believed that the more the pomegranate bursts, the broader and farther its grains spread, the faster the abundance will apply to the house.

Cleansing rituals for the new year

#1. In Brazil, white clothes are worn on New Year’s Eve to ward off evil spirits.

#2. In the Netherlands, Christmas trees are set on fire with fires lit in the streets to destroy last year’s bad memories and spirits.

#4. On New Year’s Eve in Chile, they sweep the house from the inside out.

In this way, they believe that they will get rid of the evil spirits leftover from the previous year.

#5. Old and unused plates are kept in Denmark.

They break in front of their favorite friends’ houses on New Year’s Eve.

This tradition shows how much you love your friends and get rid of bad luck on your friends.

#6. In Ecuador, there is a tradition called “Burning of Effigies.”

People on New Year’s Eve at midnight bring the puppets of politicians, pop culture figures, and other year icons and give them fire in the streets to send away the evil spirits.

How do you cleanse yourself for new year’s?

Would you like to set a new stage for the year to come?

Here I am giving you a cleansing ritual from the book “Yule: Rituals, Recipes & Lore for the Winter Solstice” by Susan Pesznecker.

You can also read here alternative ideas about cleansing at home.

Smudge the entryways and corners using sage, sweetgrass, juniper, or cedar, or sprinkle with saltwater, moving deosil (counterclockwise) from one room to the next.

As you work, repeat this:

May the winds inspire you,

and fire always warms the heart.

As you move through the space, clap your hands to disperse old, stagnant energy, then use a bell or rattle to welcome in fresh, sacred energy.

If you have one or more sleigh bells, they’re perfect for this new year cleansing.

Open windows to let in the fresh air, even if for only a few minutes—this is not only great for cleansing and clarification, but it’s also healthful.

Once you’ve finished the cleansing, bring protective elements into your rooms or hang protective talismans over doors and windows.

The earth element grounds us and provides a sort of metaphysical “anchor.”

Place crystals or small bowls of sea salt around the kitchen and evoke crystalline ice and snow.

Small ceramic or wooden trees also represent the earth element nicely, as do small animal figurines—particularly Bear, who tunnels into the earth during the winter and then emerges as the light returns.

The air element is energizing and improves our alertness and mental clarity.

Burn incense or simmer a kettle of water and spices on the kitchen stove.

Hang small white lights everywhere or cut paper snowflakes and let them dangle and spin from the ceiling.

The fire element recalls the spark of life in the so-called dead of winter.

Bring in fire burn candles, or if you have a fireplace, make use of it.

Set luminarias outside, lighting the path to your door.

String lights inside and out—the more, the better!

Sip warm mugs of tea, cocoa, or hot cider to kindle your internal fire during the long evenings.

Use mirrors to represent winter’s frozen pools and ice, or set out a small bowl or cauldron of water.

Use smooth river rocks to adorn your altars or tableaus.

On New Year’s Eve, you can do some rituals that you already feel connected to.

But, if you need some variety, you can try some of these rituals that I have mentioned from different cultures around the world.

Moreover, you can read here our other article;

Below is a Pinterest-friendly photo…. so you can pin it to your Rituals Board!