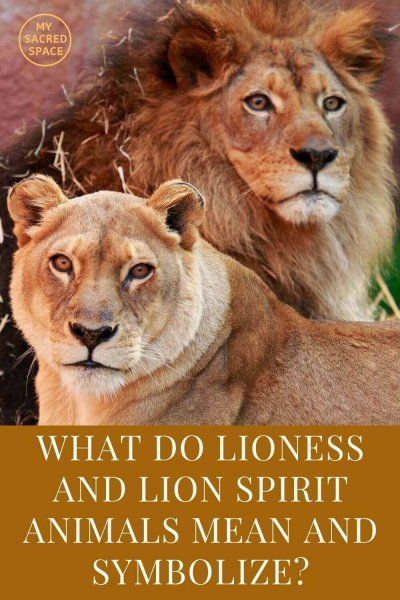 The lioness spirit animal portrays a protective mother, a fierce spirit, and diverse nature. Let us check the different symbols, traits, and guidance it gives to us.

What is a lioness’s personality?

They are the most socialized animals of the big cats animal group.

They live almost all the time in harmony and never fight if it is not necessary.

Lioness illustrates as a protector of her family. She goes to any length to protect her cubs and defend her family in every way possible.

But still, she would prefer a peaceful and austere life.

In the community of lions and lioness, all the members show a lot of compassion for the little lions.

They come to teach us to prevent unimportant discussions.

They guide us to see the most effective way on our path instead of just bumping into difficulties, problems, and danger.

What does a lioness symbolize?

This article gives an insight about the lioness that “She epitomizes the goddess and divine feminine energy.

It teaches you to trust by believing. But she still says: “if you see danger don’t be afraid to roar.”

What does the lioness mean in the Bible?

According to biblical verses, the lioness depicts victory, tenacity, and ferociousness.

It also refers to maternal characteristics. The following verses provide us a clear meaning:

“A people rise like a lioness; they rouse themselves like a lion. They will not lie down until they devour the prey and drink the blood of the slain.”

“And say, what is thy mother? A lioness: she lay down among lions, she nourished her whelps among young lions.”

“For a nation has invaded My land, powerful and without number; its teeth are the teeth of a lion, and it has the fangs of a lioness.”

In short, the lioness is guiding us to attain victory and be fierce to get it.

On the other hand, she guides us to be loving caregivers when it comes to the family and children.

Collectively, she wants to make us realize the beautiful combination of love, care, victory, and fierceness that we hold inside.

In ancient Egyptian mythology, Bastet was originally a fierce lioness goddess before becoming a cat goddess.

She was the goddess of protection, music, art, and childbirth.

This refers that the lioness is here to make you grasp the diverse creativity filled inside you.

If you have come across the lioness as your spirit animal, it’s time you must know about your artistic nature.

The lioness is here to tell that the music and dance flow within you.

You are guided to comprehend all your craft and protective energy towards the people you care about.

As a woman, childbirth depends on you, which is needed to extend the generations.

Lioness comes to tell you are the ocean of strength, both physical and emotional.

What is the “Lioness of God”?

“Archangel Ariel” which means the Lioness of God, is termed as the angel of animals and nature.

She takes care of the animals, plants, and the elements of the Earth (fire, earth, water, and wind).

She is known to have healing powers for animals.

As expressed in Learn Religions’ blog, beyond her role overseeing nature, Ariel also encourages people to live up to God’s full potential by discovering and fulfilling God’s purposes for their lives.

What does a lioness symbolize spiritually?

Lioness guides us spiritually to teach us that one can lead a calm and peaceful life, learn to live and work in harmony with others, but guides us not to behave in a self-negligent or even self-sacrificing way.

This dance of the duality of the lioness is inviting you to live your full potential by discovering and living your life purpose.

Lioness is a courageous spirit animal who helps us to overcome any fears or worries in our path.

She comes to help you to reach your full potential.

The lion spirit animal is the epitome of fearlessness, great strength, vigor, and leadership.

Lion is a multiple-trait spirit.

The lion has been used as a symbol in all different mythologies.

So, let’s find out more about it and also seek the guidance it gives to us.

What is special about lions?

Lions roar the loudest and can be heard from seven to eight km.

They have a light sensitivity six times better than any human.

They also have brilliant night vision.

The lion as a spirit animal guides you on how to efficiently use your powers and maintain them consistently.

He guides you to recognize your charisma and how to keep it up.

The lion is a loyal creature.

He comes up to protect and defend his pride no matter what the risk is.

Therefore, the lion here is guiding you about your loyal nature.

What is the symbolic meaning of a lion?

Lion has been the symbol of the Sun and gold. Middle-aged alchemists symbolize Sun with sulfur and Moon with the element mercury.

They have said that they were looking for gold to hide their search for the path for spiritual perfection.

In Ancient Egypt, the lion was the symbol of power and fortune.

The young lion was symbolizing the rising Sun.

If a lion spirit animal is coming into your life, maybe it is giving you signals that you are in the life stage of your shining identity.

When you look at a lion you feel power and dignity.

When you hear their majestic roar, you would believe their courage.

If you continue to observe them you will realize that they are calm, peaceful, and relaxed.

Inside you, they awaken feeling like respect, grace, mystery, focus, and knowledge.

Lion spirit animals come to show you how to carry your power and how to be in balance.

Does the lion represent Jesus?

According to Wikipedia, “The Lion of Judah is also mentioned in the Book of Revelation, as a term representing Jesus, according to Christian theology.”

In ancient beliefs, it was said that the lion cubs are born dead and were given life by their father’s roar.

Lion as a spirit animal here is guiding you to regain your leadership and status if you are lagging.

It is giving you the message of attaining the top position once again if you are down on the list.

The bible represents both the positive and negative aspects of the lion:

“They shall go after the Lord;

his children shall come trembling from the west;”

is a wicked ruler over a poor people.”

The first verse is positively presenting the lion.

The lion spirit here gives us the message of recognizing, attaining, and using our power, strength, and majestic character.

Alternatively, the second verse is depicting the negative nature.

The threatening roar of the lion here brings the message of evil and threats.

It indicates the satanic voices of threat and harm.

If you are worried about the roars of despair and disbelief and see a lion somehow, blow away all roars.

Have firm belief in yourself, overcome your fears, and do not surrender in front of any evil and doubts.

Rumi uses the lion as a symbol of “Insan-ı Kamil”, an honorific title to describe the Prophet Muhammad.

The phrase means “the person who has reached perfection”, literally “the complete person” or the murshid, the guide-teacher in the spiritual path.

The responsibility of the murshid was and still is to remind the person of her own source and help her to be aware of her ego on the path.

Ali ibn Abi Talib was a cousin, son-in-law, and companion of the Islamic prophet Muhammad was called the “Lion of God”.

There is a story linked with this symbol:

“When Prophet Muhammad ascends the Miraj (the Ascension of the Prophet Muhammad into heaven), first a lion appears before him, the lion asks the prophet for anything; otherwise it means that it will not pass. Prophet takes off the ring on his finger and hands it to him.

On the way back from Miraj, he sees a door and enters… When he enters, he saw Hz. Ali was there and he had that ring that Prophet gave to the lion while ascending to Miraj. There Prophet Muhammad said:

“Ya Ali, I could not arrive to understand your secret.”

In Egyptian mythology, “Maahes was an ancient Egyptian lion-headed god of war”.

He was the son of Bastet about whom we have learned in the lioness spirit animal part.

He had the same nature as his mother and was linked with war and safeguarding.

The lion head symbol indicates a sense of safeguard, loyalty, leadership, and defense against the enemy.

If you are seeing a lion’s head in your life, try to receive what it’s guiding you.

Revive your true instincts of leadership, strength, dependability, and guardianship.

In popular culture, Singapore uses the lion’s head as a symbol of courage, strength, and excellence.

Its ferocious demeanor is used as a national tenacity to face the hardships and conquer them.

There is an ancient story of a Malay prince who survived a storm in the sea with his men and reached the bank of the current Singapore River.

There, during his hunt, he saw a lion in the jungle. Taking the lion as an omen of their good luck, he decided to live there and named the city Singapura (the Malay words: Singa meaning Lion, and Pura meaning city). Hence, Singapore is nicknamed The Lion City.

For that reason, the lion head symbol is also giving us a message of the pursuit of merit, brilliance, power, and bravery.

It is also pointing towards a good luck omen.

So, take the cues from the lion’s head that you witness and work hard towards your goals. Be stubborn in the way of hardships and defeat them with determination.

Good fortune is waiting for you.

Consequently, your lion spirit is telling you about a variety of things that you must comprehend:

What does a lion symbolize spiritually?

Lion comes to give us different guidance at different times. The guidance that a Lion gives could be one of those below:

This life journey is yours.

You are the one who will understand the meaning of the symbols.

What I provide is just some guidance from ancient wisdom. If you want to go deeper on spirit animals, check our other articles here:

If You Ask What Spirit Animal Is Yours, Learn Here How to Find