What Does a Raven Spirit Animal Mean and Symbolize? 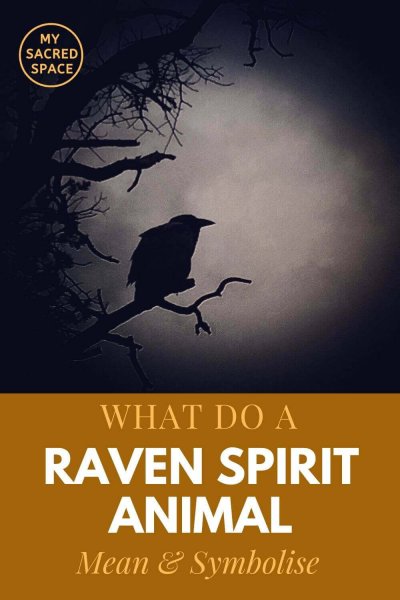 Ravens spirit animal is a powerful one. Different mythologies of different cultures are full of symbolism about ravens. If your intuition tells you that raven can be your spirit animal, then pay attention to that gut feeling. If this is the case, the next question for you is What Does a Raven Spirit Animal Mean and Symbolize?

Ravens symbolize magic, wisdom, death, and the birth of light. Once you are going to read about their stories, their unique message for you will begin to reveal. I have created a guide about the spirit animal raven’s symbolism. So let’s start.

What is the meaning of a raven in Native Americans?

The story of the raven as the creator of light goes like this:

A raven named “Kit-ka’ositiyi-qa-yit” was instructed by his father to create a world after his birth. After many failed attempts, the raven was finally successful. He started off by creating the light first. Raven heard of a wealthy man with light who will not let it out for the world. So, the raven plays some mischievous act and finally gets the light out for the world. Though the raven has created many more things, he is mainly credited for the creation of the moon, stars, sun, and rivers.

There are many versions of raven’s stories in different Native American cultures. But most of them share similar meanings.

Ravens are one of the smartest birds today. They’re highly capable of solving tricky puzzles. Besides, ravens are also very playful. They can perform some excellent stunts that even put eagles in shame.

Though different cultures recognize ravens as selfish, they seemed to be very careful in what they do. That’s why famous Turkish writer  Mehmet Murat Ildan said, “On the road to wisdom, behave like a raven and observe everything carefully!”

Ravens also have a unique personality to hide secrets. They usually hide their food in different places. But some other ravens always spy on one another to see where they hide things. And then the spy raven steals them later. Ravens often pretend to hide foods in one place but actually hide them in another location to fool the spy raven. But the attempts seldom get successful as all the ravens are very intelligent.

What is the symbolism of a raven?

Raven has been associated with many symbols. While most people see them with negative meanings, they also have some positive symbolism. A spirit animal raven can really be helpful in life. Understanding their symbolism will help you to know the significance of a raven spirit. Below I have listed some of the most important raven symbolisms:

What is the symbolic meaning of a raven?

Raven has a good reputation for being a good magician in different cultures. This gives them the symbolic meaning of magic. As I said, they are highly intelligent birds. That’s why Ravens also represent wisdom. Most ravens can talk like humans and do mimicry. It shows their exceptional abilities over most other birds.

Besides, while creating light, sun, stars, and moon, the mythological raven has shifted his shape like a chameleon. Hence a raven also symbolizes transformation.

Verse of a famous poem on ravens:

“Then this ebony bird beguiling my sad fancy into smiling,

By the grave and stern decorum of the countenance it wore.

“Though thy crest be shorn and shaven, thou,” I said, “art sure no

Ghastly grim and ancient raven wandering from the Nightly shore-

Tell me what thy lordly name is on the Night’s Plutonian shore!”

What does the raven symbolize in Native American culture?

Native American Indians are deeply engaged in using different animal & birds symbolism. The Raven symbol is also found in the culture. In the Native American Cultures, the raven symbol means that the danger has passed and good luck is near. This meaning is associated with the creation of a light story I narrated in the beginning. When there was nothing but darkness, the raven brought light to the world. However, some other tribes also symbolize the raven as a trickster due to his shapeshifting ability.

What does it mean when you see a crow or raven?

Though they’re not the same, a crow and a raven are nearly identical. The main difference is in their sizes. While a crow is the small one, a raven is more than double the size of a crow. Due to their black coat, people consider seeing a crow or a raven as an ill omen. In some Asian cultures, they also believe seeing a crow in the morning brings death news. A spirit animal raven also can visit you often. If you see a raven frequently, try to find out if it’s your spirit animal.

However, Hindus believe their ancestors’ spirit comes to visit them as crows. That’s why they often consider it good to see a crow. The story originated from the Uttara Kanda of the Ramayana. There the gods and devil were having a battle. Gods took the shape of different animals to win the battle. And then Yama (the god of death), who took the shape of the crow, give the following boon to crows as a prize:

“Oh bird, I am well-pleased with thee. Listen to my words as I utter them. As I have been pleased with thee, thou shalt, without doubt, enjoy immunity from the various ailments to which the birds are subject. And O bird, from my curse fear of death, shall not approach thee; and thou shalt exist as long as people do not slay thee. Those men residing in my dominion, being smitten with hunger, shall be refreshed along with thy relations when thou hast eaten and been refreshed. So he gives it the boon that whenever the crows have eaten and been replenished, the Pitris (spirits of departed ancestors) will also be replenished.”

What does a raven symbolize in the Bible?

Raven is one of the first birds mentioned in the bible. It symbolizes God’s messenger. Noah sent a raven from the Ark to check if there’s any dry land available nearby for the rescued humans and animals. The bible verse is:

“and sent forth a raven. It went to and fro until the waters were dried up from the earth.”

However, the raven didn’t return with the message, which gave Noah the idea that the raven found some food and stayed there. Still, he had no idea how far the land was.

What does a raven symbolize in mythology?

You’ll find many raven stories in most of the mythologies. Following are some of the most crucial mythological symbolism of a raven I have explained for you:

In the Hebrides, it is believed that giving a child his first drink from the skull of a raven will give him great wisdom and power of excellent foresight. Hence, a raven often symbolizes wisdom and prophecy in most Celtic cultures.

The Morrigan is the Celtic raven God of death, war, and destiny. Her name is interpreted in multiple forms, and “Phantom Queen” is the most popular one. She usually participated in the war in the form of a raven. Besides, she also could tell or influence the outcome of tussles.

The mythology of ravens in Celtic is quite interesting. Brân the Blessed, which means “raven,” is a Celtic/Welsh god. He was dying in the battle against enemies to protect Britain. So, he told his followers to cut off his head and bury it in the white hill, so his presence would prevent enemies from invading Britain. Now, the Tower of London is built over the same place and has six official raven residents. The legend is that if the ravens ever leave the tower, the British Empire will fall.

Ravens were believed to be trustworthy but not totally. Scottish hunters used to believe that a raven’s crusty call was a sign of successful hunting. Thus, people often take pagan raven as a symbol of good luck.

What does the crow symbolize in Celtic mythology?

As a crow eats carrion, Celtics also consider them as symbols of death. That’s why welsh poetry uses the metaphor “the crow pierced you” to mean “you have died.”

What is a Celtic Crow?

However, a Celtic crow was believed to be sacred. Earlier I talked about the Morrigan, who used to take the shape of a raven on the battlefield. The Celtic goddess also transformed herself into a crow often during the war.

What does a raven mean spiritually?

That was a lot of information about ravens I have explained above. But what about a spirit animal raven? With so much mythology and some unbelievable powers, their spirit also should be of unique abilities.

Well, from the above discussion, you can understand that a raven represents magic, wisdom, secret keeper, and creation.

Spiritually, a raven can make the impossible possible with the power of his magic and knowledge. A spirit animal raven knows well how to keep a secret. Besides, it also possesses the ability to create new things very well.

What does it mean if a raven is your spirit animal?

Have you seen ravens recently, and they’re coming to you frequently? Well, that probably means he is your spirit animal and trying to communicate with you. You can confirm it by going on a Shamanic Journey.

If you found a raven as your spirit animal, it means you’re surrounded by the power of magic. With great magical abilities, you can bring some excellent changes to your life.

Besides, a spirit animal raven will provide you with great wisdom. You can use the knowledge to know the unknown. If you have the willpower, you also can win any battle like the raven Goddess Morrigan.

Are you struggling to hide secrets from others? Then a spirit animal raven will be of great help to you. Communicate with your spirit animal through a Shamanic Journey or a deep meditation to transform your life in a positive way. You’ll be able to do that just like a raven shifts his shape in different mythologies.

Based on who you are, messages from a spirit animal raven can vary. Using raven card decks can be a great way to unveil the secret of your spirit animal. Purchase the cards and try to find the meaning.

These articles below can also be interesting for you:

How to Shamanic Journey?

Below is a Pinterest friendly photo…. so, you can pin it to your Spirit Animals Board!