What Does a Rhino Spirit Animal Mean and Symbolize? 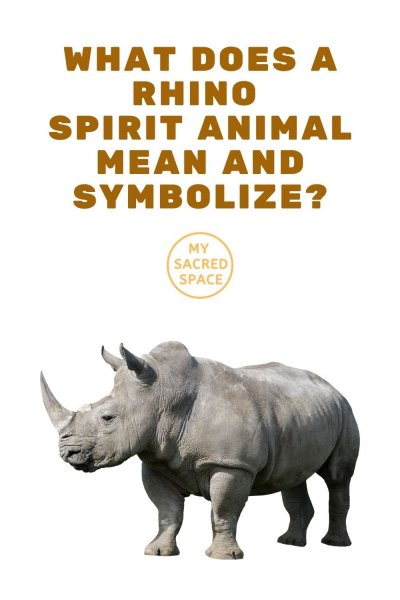 You are the one who will find out the unique messages of your Rhino spirit animal. So join me in the journey of learning more about their symbolic and spiritual meanings.

So that you can interpret their messages better.

What does a Rhino spirit animal mean?

Well, a Rhino spirit animal can offer you the wisdom of 50 million years.

It can guide you to achieve your strength by using your power and sensitivity.

You need to understand the meaning of different Rhinos and their characteristics to catch on to the sense of spirit animal Rhino.

Below I have explained everything you need to know about this strong animal:

What type of animal is a Black Rhino?

Usually, black Rhinos are the aggressive ones.

Though they remain calm most of the time, black Rhinos can be frightening when they sense danger.

White Rhinos have the largest body among the species.

At first sight, you may think they are more combative than the black ones, but the opposite is true.

A white Rhino is calm and gentle, trying to avoid dangerous situations.

Interestingly, white Rhinos are grey. This is because the origin of the name is the Dutch word “wijd,” which means “wide” in English.

White Rhino’s name is due to the Rhinos’ wide mouths. But early-English speaking South Africans misinterpreted the word as white, and later the “White Rhino” name became permanent.

Now you may ask, what does a Grey Rhino mean? Well, a grey Rhino means staying out of danger and focusing on your activity.

The black Rhino may appear to guide you.

A black Rhino spirit animal can teach you to fight your enemies.

It will provide you with the necessary strength to become successful.

You may also have heard of the Golden Rhino and want to know its meaning.

If you don’t know yet, the Golden Rhino is a medieval artifact made from wood with a thin cover of Gold.

The Golden Rhino was created in the Kingdom of Mapungubwe (1075-1220), which is located in South Africa.

Its meaning is associated with South Africa’s wealth in the middle ages.

Black Rhinos can be aggressive and dangerous.

White Rhinos may seem aggressive, but they are not dangerous at all.

Most of the time, they run away if they sense danger.

But the horn has a much deeper meaning.

It represents defense, protection, and supremacy.

Below is more explanation:

What does a Rhino use his horn for?

A Rhino uses its horn for posturing to indicate that none should enter his territory.

The Rhino shows its supremacy by doing so and also uses the horn during fights for self-protection or defense.

What does the Rhino horn do?

There is no scientific proof of that, and this part was removed from the TCM practices.

But still, many believe in the myth that poachers are cutting Rhino horns to sell to the black market, which is illegal.

Why do they remove Rhino horns?

Rhino horns are removed as a protective measure against poachers.

Usually, poachers cut the horns from the skull, which hurt these animals.

So, the horns are removed to allow them to grow again and protect Rhinos from poachers.

Rhinoceros spirit animal is full of wisdom. So when a Rhino spirit animal comes into your life, it will share the knowledge it has gained over the years and help you prosper in life.

Rhino eyesight may not be great, but its smelling power is excellent.

So, a Rhino spirit animal is susceptible and often can be aware of the danger in advance.

Rhinoceros spirit animals like to stay out of conflict. However, as the animal is territorial, the spirit animal Rhino also has a great sense of possession.

My spirit animal is a Rhino

Have you ever asked yourself, “Is my spirit animal a Rhino?” When your spirit animal is a Rhino, you will have better control over yourself.

You will have the strength and a greater sense of what’s happening around you.

What does a Rhino symbolize?

Understanding the symbolism of the Rhinoceros can help you understand the spiritual meaning of this animal.

Below I have described different symbolic meanings of the Rhino:

It prefers to stay alone and in peace instead of getting involved in the conflict.

What does the golden Rhino symbolize?

The Golden Rhinoceros of Mapungubwe symbolize trade and wealth.

It mainly refers to how prosperous South Africa was in the middle ages.

Symbol of a Rhino

A Rhino symbol uses the animal’s head and the horn.

The Rhino uses the horn for defense and creates holes on the ground, which allows the animal to connect with mother earth.

Rhino horn symbol means assurance, steadiness, and a connection to the divine beings. It also symbolizes protection and defense.

While some versions interpreted the animal as Rhinoceros, some translated it as the unicorn.

Here are two verses from the bible:

“Canst thou bind the rhinoceros with thy thong to plough, or will he break the clods of the valleys after thee? Wilt thou have confidence in his great strength, and leave thy labors to him?”

The prophetic meaning of the Rhino can be that you should not break any rules and always stay righteous.

It may also signal you to hold your patience as the white Rhino does.

What does it mean to see a Rhino in your dream?

A Rhino in dreams usually means a bright future. It indicates that you will become successful soon, especially financially independent.

The rhinos in a dream can mean many other things such as:

Dreaming of a Rhino chasing means you are scared to make decisions in life.

But believe me, if you take that decision, it can bring a huge positive change in your life.

A baby Rhino means you are still small and young, but you will grow soon. As babies eventually become adults, the baby Rhino dream symbolizes growth and improvement.

What does a Rhino mean spiritually?

Similar to the symbolisms, a Rhinoceros is deep in spiritual meanings.

Following are some of the spiritual meanings of the Rhino:

Spiritually a Rhino means that your outlook may seem different than who you are. For example, people often misunderstood Rhinos as dangerous.

So, many people also consider you as minor and unable to do big things, but that doesn’t mean you are inferior.

On the contrary, you should know that you can do anything you want in life.

A white Rhino calms your spirit.

It encourages your energy to be gentle, have patience, and be nice to others.

When you have a white Rhino spirit animal, you will have the knowledge that you may not get from somewhere else.

You will see the blue Rhino in the Chinese Geomancy of Feng Shui.

It pushes away threatening and negative energies.

Rhino horn refers to spiritual awareness. It connects your spirit to the divine mother earth.

You also can use the horn as an antenna to achieve spiritual growth.

No matter how down you are, you can grow as the Rhino horn grows back even after removing.

When your spirit animal is a Rhino, it will come with many important messages.

If you interpret the messages correctly, you can use them to lead a better life.

The message from a black Rhino can be that you are protected from all kinds of negativity.

Or a white Rhino may be trying to provide you with the ancient wisdom it possesses.

However, you are a unique person, and the Rhino spirit animal message’s for you is also unique. I can not tell for sure what it is.

You can communicate with your spirit animal Rhino and get the message through deep meditation or a Shamanic Journey.

If you have a Rhino spirit animal, you can buy this unique Spirit Animal Oracle Card Deck to get more insights into your spirit animal.

It comes with a guidebook that provides detailed information about using the cards.

Rhino spirit animal is inviting you to find your inner calmness to find out the mysteries of ages. You have all the wisdom within, so focus on your inner journey.

Let the Rhino spirit animal guide you in this fantastic journey.

·   What Is the Meaning of a Spirit Animal?

·   If You Ask What Spirit Animal Is Yours, Learn Here How to Find

·   How To Shamanic Journey?

·   What Is Shamanic Journey Drumming and How Does Shamanic Drumming Work?

·   How To Connect with Your Spirit Guides?