What Does a Snake Spirit Animal Mean and Symbolise? 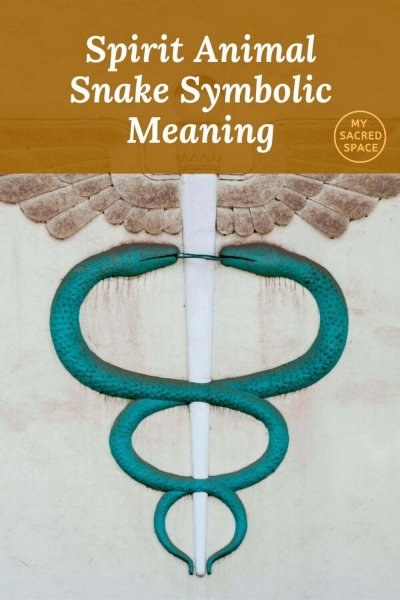 Do you have a spirit animal Snake and looking for the symbolic meaning?

Snakes have been one of the most respected animals throughout human history.

The stories told about Snakes have been telling us the creation and transformation.

Still, the interpretation of the Snake symbol has been a wide variety depending on different cultures.

This is why I try to bring you different stories, mythologies, legends, and symbols to follow your intuition after reading it.

If you are ready, let’s start!

Have you seen Snakes recently?

Believe me; this isn’t a coincidence.

If you see a Snake, it conveys to you some messages.

However, the message can vary based on how you see it or who you are.

Therefore, you should try to connect yourself with the Snake.

Go to a deeper state of your mind and try to find the Snake.

He will provide you with guidance.

The Snake, the symbol of rebirth, eternity, mysteries of life, psychic energy, is the guardian of sacred spaces and secret information.

Snakes do not have ears, but the small bones in their heads pass sound.

Thanks to this anatomical system, it is possible for them to hear even very low-frequency sounds.

Their immediate perception of all vibrations from the earth connects them to the underworld, where all mysteries remain hidden.

Spiritual meaning of Snake in house

I have seen many people tend to kill Snakes if they come near the houses. But I’m afraid that’s not the right thing to do.

If Snakes see people, they usually slither away unless you hurt them.

However, if we look at the spiritual representations of Snakes, then seeing one in your house might mean personal growth.

So maybe it’s time to focus on your spirit and grow.

The Snake that will come into your life may be a warning that there will be very rapid transitions and changes in your life.

These changes signify the death of the old and the birth into yet undiscovered power, creativity, and wisdom.

What do you do when you suddenly see a Snake? Most of you, I believe, scream in fear.

However, some people consider it a good sign to see Snakes.

Is seeing a Snake good luck?

Moreover, some people also believe seeing a Snake is a good luck. However, Snakes are a symbol of fertility.

Hence, seeing them can mean that something good is going to happen.

Besides, seeing a Snake can also mean he is your spirit animal.

So now you may think about how it can be good luck.

Well, read the whole article, then you’ll know why I believe a spirit animal Snake is good for you.

Nonetheless, if you don’t know your spirit animal, you should try to find it soon. Look here and here for more guidance.

If you see a Snake cross your path, that can have several signs. Based on different cultures, the meaning varies.

However, a common belief is that if a Snake crosses your path, your life needs to transition.

Maybe there is something in your life that you should let go of like Snakes shed their skin.

Although the name Snake doesn’t sound appealing to many of you, it can heal you. Hence, people consider Snakes as a symbol of healing.

However, the idea first came from the ancient Greek God Asclepius. He was the God of medicine and specialized in healing people.

His power source was a rod with two Snakes coiled around it.

This is Caduceus and the valid symbol of medicine.

Not to mention, even today, Snake venom is used as medicine.

And it was pretty expensive too.

However, in India, people worship Snakes in temples.

Besides, in the holy month of Shravan, people feed them with milk.

During this month, it is strictly prohibited to kill them.

To Hindus, the Snake is a symbol of materiality and eternity.

“Among the Serpent, I am Ananta.”

However, Ananta is a divine Snake whose endless coil floats on the water, and Narayana rests there.

Are Snakes a symbol of evil?

However, In the Chinese Zodiac, they explained some of the evil nature of a Snake.

First, they believe a Snake is an evil being because it doesn’t have a vocal cord. Thus humans can not hear or locate them.

Second, a Snake is a mysterious creature who can crawl without legs and leaves no trace behind.

In ancient China, people also worshipped Snakes because of their mysteriousness.

Ayşe Nülgün Arıt, in her book called ‘Sacred Guides in Shamanism,’ talks about different symbols of evils in different cultures:

‘In many ancient cultures where bodily unification is not taboo, on the contrary, the Serpent was a unique being symbol that contained masculine and feminine energies together, and in heavenly religions, it was associated with demonic powers because of its sexuality.

We see that the Serpent seduced Eve and expelled man from Paradise.

As Christianity grew stronger in England, the decision was made to end high spiritual wisdom in Celtic society, and the Druids began to be chased, captured, and driven out.

Since dogmatic cardinals disliked spirituality and theories of spiritual enlightenment, they judged the use of the Serpent symbol as a subconscious expression of sexuality.

This operation was recorded in the British Church records as “We expelled the Snakes from Ireland.”‘

Throughout the Bible, there is a lot of mention of Snakes or Serpents. However, in Bible, a Snake symbolizes Satan or the devil.

It can cause you temptation. I found the following verse in Revelation:

“And he seized the dragon, that ancient Serpent, who is the devil and Satan, and bound him for a thousand years.”

The reason behind calling a Snake devil is because a Serpent deceived Eve to disobey God in the garden of Eden.

Nonetheless, I found another verse in the Bible where a Snake is wise. It is:

“Behold, I am sending you out as sheep amid wolves, so be wise as Serpents and innocent as doves.”

What kind of Snake was in the garden of Eden?

So, what happened in Eden garden?

And what kind of Snake was there?

Well, after creating Adam and Eve, God let them eat fruits from the garden of Eden.

However, they were prohibited from eating fruits from a specific tree.

But later, a Snake came and tried to convince Eve to have that fruit, and she refused.

Then the Snake quotes:

“But the Serpent said to the woman, ‘You will not surely die. For God knows that when you eat of it, your eyes will be opened, and you will be like God, knowing good and evil’.”

So, Eve, with Adam, eat those fruits and found themselves naked.

And then God came & became aware of their transgressions.

Hence, he sent Adam & Eve to earth, punished them, and cursed the Snake.

Now a lot of people are curious about the Snake.

However, there’s no clear explanation of the Snake in genesis.

But later in Revelation, it was mentioned as the devil.

“And the great dragon was thrown down, that ancient Serpent, which is called the devil and Satan, the deceiver of the whole world—he was thrown down to the earth, and his angels were thrown down with him.”

Serpent and Snake both words are interchangeable.

However, the Serpent is more used in literature.

In contrast, the Snake is a commonly used word.

Nonetheless, you may find a slight difference between them in the dictionary.

Besides, in greek mythology, the Serpent often refers to large, legless, dragon-like creatures, including Snakes.

Moreover, in Norse mythology, Jormungand was a mighty sea Serpent. He was thrown to the sea by Odin, the father of the God of the thunder, Thor.

Nonetheless, in the final battle, Thor falls dead, poisoned by the venom of the Serpent.

What does a spirit animal Snake represent spiritually?

Spirit animal Snake represents rebirth or transformation of your spiritual self. Moreover, a Snake is a source of primal energy. Nonetheless, if a Snake comes to you as a spirit animal, it also may mean fertility or temptation.

Shamanically, the Serpent represents the sacred transformation, change, energies that create man and give vitality.

In Hinduism, the energy of the Serpent called kundalini, which is coiled at the bottom of the spine, rises and stimulates the chakras, which are emotional, mental, and spiritual energy centers.

When the Snake arrives, it becomes a precursor to attaining higher spiritual energy by discarding beliefs and habits that have no significance and value. In many ancient civilizations, the Serpent was depicted as swallowing its tail and forming the symbol of eternity.

Those ready to change their skin are guided through the spirals of change and transformation.

Besides, in African mythology, there is a unique Snake.

The tale says that even if you cut the Snake into two pieces from the middle, it will be reborn soon.

Hence, I believe, no matter how much people try to hold you down, with a spirit animal Snake, you can be reborn and rise to the top.

Moreover, Snakes stay on the ground.

Their body touches the earth’s soil. Therefore, they’re a huge source of primal energy. This energy will help you to become more powerful.

As the Snakes resemble a phallus, they are also associated with sexuality. A Snake can come to you as a spirit animal when you lack intimacy with your partner.

Serpent energy is cosmic integrity consciousness; it can be ready to try anything voluntarily, without resistance.

The Snake is an excellent guide and appears to you when ready.

What do you say, are you ready?

These articles below can also be interesting for you:

How to Shamanic Journey?