What Does a Wolf Spirit Animal Mean and Symbolize? 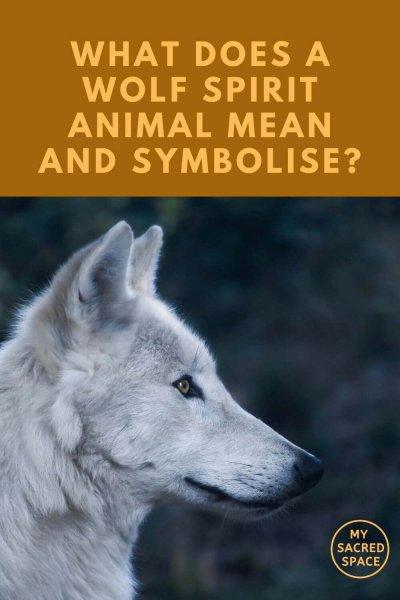 Whatever is the case, it is a good idea to get more information from their characteristics.

These animals are archetypes that reflect the energies that are in harmony with their characters in this physical world.

Because of that, it is important to get information- to know them better and create a better relationship- both about their characteristics in this physical world and also from mythologies, legends, and stories.

After starting to get information about them, we begin to understand and implement their messages better.

Still remember that even though your spirit animal is an animal mostly from this physical world, they are energetical facilitators of connection to your deeper parts of your soul.

You will meet and communicate with your spirit animal in the shamanic journeys.

After the journey, you will write down what you have experienced.

Then you will try to understand what that means symbolically.

So make your search, open your eyes, ears, and heart and trust your intuition.

Let’s start. Shall we?

What does a wolf spirit animal mean?

Wolves leave as family and they choose their couple to be all their life together.

They take care of their children together as a couple.

Even though they live as perfectly organized herds, each wolf is a free spirit.

Wolves are strong and powerful, still, they prefer not to fight if they can prevent it.

Wolves use their body language extremely to express themselves.

When they are angry pull their ears straight and pluck their teeth out.

When skeptical, they pull their ears back and their eyes squint.

They stick their ears to their heads when they’re scared.

When they want to play, they dance and bend their heads playfully.

Social values, connection with nature via rituals, intuition, family, loyalty, spiritual power, and intelligence are the main symbols of a wolf.

Especially at the time of change, wolves show how to succeed easily.

Wolves give us a lot of wisdom about leadership if we can look in detail at how they get organized.

In a herd, at the front, walks 3 most ill wolves, in case there is a threat they prefer to serve their community by informing and also to open the way for those who follow.

Beside them goes the 5 most experienced warriors. In the middle beside the warriors walk 11 she-wolves, so having good protection.

Besides she-wolves, there are another 5 warriors.

Behind all, comes the leader of the herd, seeing all the herd together.

This symbolizes to us that leadership is not about walking in front but walking most correctly. Leadership is a dance in a community, more than a one-person game.

Wolf’s howl is a special one, coming from the source, and is immensely powerful.

That is how the wolves find their tribe and show their boundaries to those who are not from their tribe.

If you hear a howl in your shamanic journey, this could be a symbol to protect your limits and set more boundaries.

What is a wolf personality?

Wolves hunt in droves and can travel 90 kilometers per day.

They are durable and strong.

When wolves come into your life, they could remind you of the importance of empowering yourself and patience, and protecting yourself.

They are incredibly careful animals.

Even in a herd, there are 40 wolves, while you track the footprints you would see 4-5 animal traces, showing that they are very organized and paying special attention to details.

What does a lone wolf symbolize?

Wolves are animals who travel both with herds and alone.

They are great with socializing, loyalty, and being part of a community as well as having their freedom.

According to how you see the wolf-alone or with the group- the symbol of the spirit animal can vary.

A lone wolf is an alone explorer who is freely going around on adventures and coming back to explain all to its community.

So, if a wolve came to your shamanic journey, maybe is telling you that you are a good thinker and teacher.

If not, maybe showing you to be open to new ideas and concepts.

Lone wolves are showing us the importance of being alone to make discoveries about one’s self.

This does not mean being alone all the time. There could be a balance.

Wolves are great family animals and at the same time free spirits. They are coming to show this balance to us.

You can hear the howl of the wolves at night because the night is silent.

Even though night can be fearful for some, it is that time when you have your dreams to connect with your deeper truth.

Wolves are great teachers to find this balance of aloneness and community life to be in the harmony with life.

When one looks to the wolves in folklore, religion, and mythology, one can see different stories as both sides of the coin.

Wolf’s predator nature, and strong physical character, made him the symbol of both the warrior and the devil at the same time.

The popular culture’s wolf symbolism has been affected mostly by the devil side, which is a picture lacking the big information about the collective history of humanity.

The wolf had been a great sacred animal especially for the nomadic people of the Eurasian steppe and North American Plains.

Wolves are the most respected animals for the Turkic nomadic cultures of Eurasian steppes.

There are 2 important legends.

One is the Asena legend, where it talks about a little Turkic village in the north part of the Chinese country.

The soldiers killed all the people in the village except a baby.

The baby’s life had been saved by an old she-wolf with a sky-blue mane named Asena.

The she-wolf found this baby, gave milk and life to him then this she-wolf gave birth to half-human half-wolf creations, which Turkish legend says were the origins of Turkish people.

The next legend is about a grey wolf showing the Turkish tribe the way out of their legendary homeland Ergenekon.

What does Wolf mean in Native American?

Many Native American tribes credit the actual creator of the earth to be a wolf.

For Native American people, it is believed that wolves show humans how to connect with the deeper parts of one’s soul and empower intuition.

Remember the image of the wolf howling under the moonlight. A beautiful connection with nature via rituals.

The Capitoline Wolf is a bronze sculpture depicting a scene from the legend of the founding of Rome.

The legend of the founding of Rome says that a she-wolf saved the lives of Romulus and Remus, twin brothers, sons of Mars, and founder of Rome.

Twin brothers were ordered by the servant to be killed by their great uncle but then the servant had pity on them and let the twins just near a river.

A flood happened and the river took the twins gently downstream, then they were adopted by a she-wolf called Lupa an animal sacred to Mars.

Besides these she-wolf symbols as the protector and the creator, there is another symbol of a wolf in human history.

Who is the wolf god?

According to Brittanica, the wolf god is Fenrir.

He was the son of the demoniac god Loki and a giantess, Angerboda.

Fearing Fenrir’s strength and knowing that only evil could be expected of him, the gods bound him with a magical chain made of the sound of a cat’s footsteps, the beard of a woman, the breath of fish, and other occult elements.

When the chain was placed upon him, Fenrir bit off the hand of the god Tyr.

He was gagged with a sword and was destined to lie bound to a rock until the Ragnarök (Doomsday) when he will break his bonds and fall upon the gods”.

What does the Bible say about wolves?

There are quite a lot of verses in the Bible about the wolves, just 2 examples below:

“Beware of the false prophets, who come to you in sheep’s clothing, but inwardly are ravenous wolves.

The wolf and the lamb will graze together, and the lion will eat straw like the ox, and dust will be the serpent’s food.

They will do no evil or harm in all My holy mountain,” says the Lord.

What does a wolf represent in the Bible?

Jesus being a shepherd and wolf being the main symbolic animal for Romans, the wolves were symbolized with their liar and devil character in Bible.

When one looks at modern folklore, literature, and popular culture one can see that the Norse mythology and the Christian symbol are almost accepted as the only character of wolves with the Big Bad Wolf stereotype from Aesop’s Fables and Grimm’s Fairy Tales.

It is a hard question to answer: What does a wolf spirit animal mean and symbolize?

Can one really answer this?

I am not sure but at least one can intent with humbleness and be aware that one can just see and know as much as her perception.

And human perception is limited.

Still, guidance is there all around us.

One can be aware of that, slow down and practice continuously getting this guidance from all creations in the web of life.

Slow down, be aware, realize your connection and relationship with all beings in this life.

Ask for guidance and know that you will receive it.

When you receive, trust your intuition.