What Does Star of David Mean? 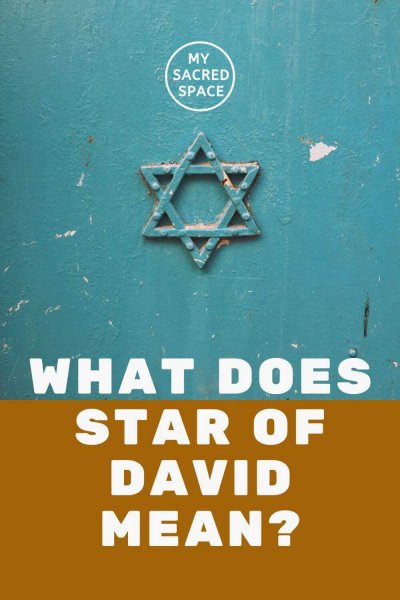 The Star of David commonly appears in the Jewish community and on the national flag of Israel. Although it gained popularity after the 17th century, it has been around for longer with great significance in different cultures and religions.

What is the Star of David, and what does it symbolize?

Star of David (Hebrew “Magen David”) is a combination of two equilateral triangles that form a six-pointed star or a hexagonal shape. It is a common symbolism for Judaism and Jewish identity.

But what does it mean? Where did it originate, and how did it become the symbol of the Jewish community?

Below I will be discussing the origin of the Star of David and its symbolic meaning:

What is Star of David meaning?

There is no specific meaning for the Star of David. Different persons and cultures have interpreted the symbol differently.

In another interpretation, three stars on one side of the star mean creation, revelation, and redemption, while the other three corners mean human, world, and God.

Although the exact origin of the Star of David is still unknown, it is believed that the symbol originated from the Shield of David.

David was an Israelite warrior who later became a King; he used a leather shield with a unique frame design of two equilateral triangles. The shield of David is often interpreted as God’s divine protection for King David.

However, the symbol of the Star of David spread in Eastern Europe in the 17th century. Later in the 19th century, European Jewish adopted it to represent Jewish religion like the Cross represents Christianity.

On October 28, 1948, the blue Star of David was depicted on the national flag of Israel. It is often interpreted as “I stand with Israel.”

What does the Star of David mean in astrology?

The astrology of the Star of David is said to have originated from King David’s horoscope, which is believed to have been born with two fortunate grand trines. These grand trines interlocked together to create the six-pointed star that made King David unbeatable.

The symbol is still popular in modern astrology and is believed to provide individuals with unique and positive talent.

What does the Star of David mean spiritually?

Spiritually, the Star of David refers to our soul’s connection with God from every direction. The six points indicate the six directions east, west, north, south, up, and down.

As the Star of David was associated with the Shield of David, the symbol is also believed to protect our spirits from evil eyes.

People often wear Star of David jewelry with the belief that it will protect them from all kinds of harm. However, if you also want to wear one, you can use this Blue Star of David Pendant Necklace.

In Hinduism, the upper triangle of the Star of David represents Shiva (divine masculine energy), while the lower triangle refers to Shakti (divine feminine energy).

Hence, the Star of David means the combination of male and female energy and power.

The Star of Bethlehem was mentioned in the nativity story of the Gospel of Matthew. It tells us that a bright star appeared in the Eastern sky when Jesus was born. Three wise men (Magi) followed the star to find Bethlehem, the birthplace of Jesus.

The Star of Bethlehem and the Star of David are not the same. They have appeared in different timelines with different significance.

Although the Star of David and Star of Solomon are often associated, they differ.

What is the symbolism behind the Star of David?

Generally, the Star of David symbolizes the Jewish community and Judaism. It also symbolizes martyrdom and heroism to the Jews.

What do the six points of the Star of David symbolize?

The six points of the Star of David symbolize God’s protection for us from all six directions. Moreover, the six-pointed star represents peace and harmony in Buddhism.

Hamsa with Star of David meaning

Hamsa is a palm-shaped amulet with a central eye motif representing God’s hand. It is a protective symbol to ward off evil.

Hamsa with the Star of David symbolizes protection, power, strength, and blessings.

What religion does the Star of David represent?

The Star of David mainly represents the Jewish religion, like the Crescent moon represents Islam, the Cross represents Christianity, and the Om represents Hinduism.

Hanukkah is the eight-day Jewish festival of lights to commemorate the rededication of the Second Temple in Jerusalem. According to a legend, here, the Jewish stood up against the Greek-Syrian oppressors in the Maccabean Revolt.

As the Star of David is the most common symbol of Judaism, it is also used in Hanukkah for decorative purposes.

Star of David meaning in Christianity

In the book of Samuel, David was a young shepherd who slew the giant Goliath. The Star of David is believed to have originated from the shield David used against Goliath, but there is no reliable reference to the story.

Star of David meaning in Hinduism

Star of David is also known as “Shatkona” in Hinduism. This is because it represents the divine combination of male and female and a source of all creation.

Star of David meaning in Islam

Why is the Star of David important?

The Star of David is considered important because of how David was able to defeat the Philistines with a shield that has a six-pointed star frame.

Besides, Jews were forced to wear a yellow badge in the Nazi-occupied European areas. The badge had a symbol of the Star of David that indicates the martyrdom and heroism of the Jews. That’s why it’s important to them.

For me, the Star of David is important because its six corners are believed to provide God’s protection to me and my spirit from evil energies.

Below is a Pinterest friendly photo…. so, you can pin it to your Rituals or Ancient Wisdom Board!