What Does the Feather Symbolizes? 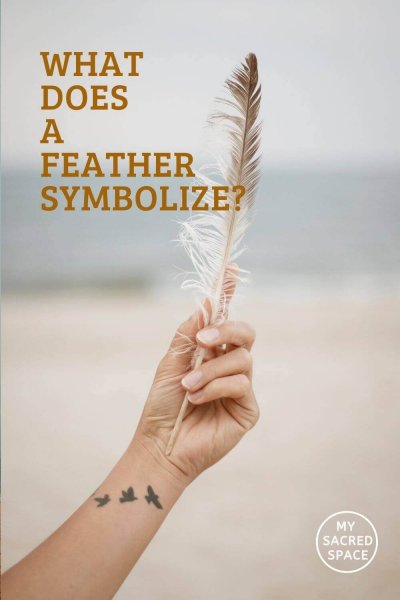 Have you found feathers in unexpected places recently? And are you asking what does the feather symbolizes?

Well, such incidents can have different meanings. Maybe it’s a message from the divine beings or from someone you lost.

But what message do feathers carry? There can be various interpretations of getting feathers.

Therefore, knowing about the symbolic meanings of feathers and how different cultures used to see them can be helpful.

Following is the detailed guide to feather meaning, symbolism, and representation.

What do feathers mean, symbolize and represent?

J.E. Cirlot explained the symbolization of a feather in his book “A dictionary of symbols” as such,

“Whether singular or in groups, the feather symbolizes the wind and the creator-gods of the Egyptian pantheon: Ptah, Hathor, Osiris, and Amon.

Feathers correspond to the Element of air—to the realm of the birds.

And, for the same reason, cultures in which aerial myths predominate, such as American aborigines, used feathers as an essential feature of their adornment.

The feather headdress of the Indian chief closely relates him to the demiurgic bird.

As a determinative sign in the Egyptian system of hieroglyphs, the feather enters into the composition of such words as ’emptiness,’ ‘dryness,’ ‘lightness,’ ‘height,’ ‘flight.’

According to St. Gregory, feathers symbolize faith and contemplation, and the quill denotes the Word.

The Egyptian sign for the quill signifies ‘delineator of all things, though it may be that this sign represents a cane-leaf; however, the meaning turns upon the function rather than the material.”

What is the symbolic meaning of a feather?

The symbolic meaning is associated with freedom, honor, power, angel, and connection to the spiritual realms.

When birds fly in the sky, their feathers can see the world from a different perspective. But, like birds, they are also free to go anywhere, which is why feathers represent freedom.

People in different cultures wear bird feathers as a symbol of honor and power. They believe that a feather carries all the power of the birds. You will find such traditions mainly in Native American culture. I will talk more about them in a moment.

Then it also can happen that the feather is a message from the divine beings or angels. There is a common conception that angels have wings.

“I was so blessed.

I gave my heart to

who plucked the feathers

and built a nest for it.”

So, the feather you found may be a blessing from the angel.

And then it also can be a message from your loved ones who just passed away. Maybe they are trying to say that they are in good condition.

What is the symbolism of a feather?

Some of the symbolism of feathers in different cultures and movies are:

What does the feather symbolize and represent in Native American culture?

When a feather falls from the sky, they believe it is a blessing from God.

Those who are influential in a particular tribe wear crowns with feathers of birds. Even warriors who perform well and win wars are also awarded bird feathers.

But what is the significance of feathers in Native American culture? Why are they so respected?

The following explanations may help you with the answer:

What does the Native American feather symbolize?

As I told you earlier, feathers are believed to be close to heaven. That is why Native Americans consider the feather as a holy thing.

However, the symbolism of feathers in the culture also depends on the bird whose feather it is. Therefore, different birds symbolize different meanings, which are also connected with the feathers.

For example, eagles are considered to be highly powerful in Native American culture. That’s why they often use the Eagle feather to symbolize strength, bravery, and sight.

What do feathers symbolize in Indian culture?

Native American Indians believe that a feather can connect you with the power of the bird it came from and with God. A feather also symbolizes strength, power, honor, and holiness in Indian culture.

What does the feather symbolize and represent in the movie Forrest Gump?

If you have watched the classic movie Forrest Gump, you must wonder what the feather means? In case you haven’t watched it, here’s a little explanation of what I am talking about:

The movie starts with a feather floating in the air and falls at Forrest’s feet. He takes it and puts it into his suitcase and begins to tell the story of his life.

Forrest’s life was full of unexpected events. He went through a lot of ups and downs and finally became successful.

The feather in the movie Forrest Gump represents life and symbolizes the uncertainty our life goes through. Like the feather goes in the direction where the winds take it, our lives are also out of control. We never really know what is next for us.

What does the feather symbolize in touching spirit bear?

Touching Spirit Bear is an excellent classic written by Ben Mikaelsen. A feather is passed from person to person in the Circle of Justice meeting. Only the person holding the feather gets to speak.

The feather in Touching Spirit Bear symbolizes respect and responsibility. To share an opinion in the meeting, a person must hold the feather. And he also must speak honestly from the heart.

What does the feather symbolize in blue origin?

Blue Origin is an American aerospace manufacturer. The feather in the Blue origin symbolizes the perfection of flight, freedom, and exploration.

What do peacock feathers symbolize in Christianity?

Peacock feathers in Christianity symbolize virtues. In earlier days, Christians used to wear a ring with three peacock feathers connecting as a symbol of charity, faith, and hope.

Peacock is also in the bible:

What do feathers symbolize and represent in the bible?

Here King refers to King Solomon. The Christians often represent peacocks as a symbol of resurrection with this verse.

What do feathers symbolize in dreams?

Have you dreamt of a feather? What does a feather symbolize in a dream?

Feathers in dreams can symbolize blessings or messages from angels, especially if it is white. If you are going through a challenging period, the dream may be a message that all of your struggles will end soon.

What do black feathers symbolize in dreams?

But what does a black feather symbolize in a dream? Although black may seem evil, there is nothing to worry about. A black feather in your dream may mean that your angel is fighting evil and protecting you.

What does a feather symbolize in love?

A feather is also often seen as a symbol of love. In love, a feather may mean that you will have success in love and romance.

What does seeing a feather symbolize?

If you have seen feathers in unexpected places, it can either be a message from angels or your loved ones who are no longer with you.

An angel’s message can be a blessing for you that you are going in the right direction in your life or that good days are ahead.

Then your loved ones may also try to tell you that they are happy in the afterlife. So if you ask what do feathers symbolize after death, then this can be your answer.

What do feathers represent spiritually?

You may be holding your spirit to certain limitations.

When a feather appears to you out of nowhere, it may mean that it is time to set your spirit free. So do whatever your heart wants.

Then if you are doing any spiritual ceremonies, you may also use a feather. Native Americans used to do that as they believed feathers were associated with the spiritual world.

A feather also represents the strength of your spirit. For example, if you feel broken, a feather may appear to you to heal.

So, if you see feathers in unexpected places or dreams, do not ignore them. Instead, try to find out the meaning. It can bring a lot of spiritual significance to you.

If this article inspired you, you can also read these articles below:

What Do Colored Feathers and Different Feathers Symbolize?

What Do Bird Feathers Symbolize?

Below is a Pinterest friendly photo…. so, you can pin it to your Signs Board!