What Is Shamanic Journey Drumming and How Does Shamanic Drumming Work? 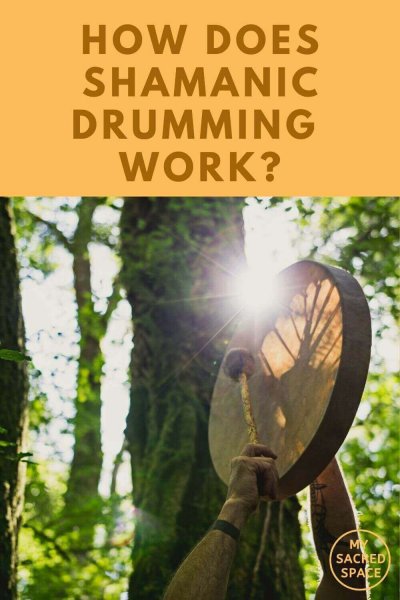 Shamanic journey drumming is a magical tool that opens the doors of different realities for us. We are not alone, and we are part of a larger web of life. The idea of Michale Harner about spiritual ecology, fundamental knowing that everything is alive that everything deserves respect and, everything is on some level sacred and it deserves to be treated that way.

What is shamanic drumming?

Shamanic drumming simply means to change consciousness at will by a drum.

When we talk about shamanism, we are talking about the discovery that there is a whole other reality. Maybe the most important accomplishment of Michael Harner to the academic world was saying simply that: spirits exist. We are not alone in this creation.

The journey of exploration to outside of space and time, where you learn to access these other dimensions of reality through rhythmic sound typically drumming oftentimes rattling.

Scientific research shows that in nine minutes of steady drumming most people can access this altered state. For some people, it takes longer, for some less time.

So, the drumbeat is the vehicle that carries you to the sources of wisdom, to the spirit.

You ask the spirit to come but it is up to the spirit to decide to come or not, then once the spirit comes, you create a relationship with this specific spirit.

How does shamanic drumming work?

During his hard work in exploring experimental shamanism, Michael Harner discovered and developed a drum-playing technique suitable for almost everyone. In the book The Way of Shaman, he describes the drum beat rhythm that he finds most suitable in shamanic studies and the effects of this rhythm on the state of consciousness. To summarize, he suggests a continuous and monotonous rhythm between 205 and 220 beats per minute. It recommends not changing the scale of the rhythm and the intensity of the beat. He explains that it should not be perceived as a piece of music, but as a means of differentiating and directing, almost hypnotizing, to differentiate the state of consciousness. The drum rhythm is unlikely to put a person in a deep coma-like trance.

Ayşe Nülgün Arıt explains the shamanic trance in her book ‘Cosmic World of Shaman’ as such: ‘It may be useful to mention once again the definition of trance. Generally, with a false perception, the shamanic trance is thought to be a state in which the daily reality completely darkens and leaves the spiritual body in inertia and passivity.

Trance defined in this way, that is, a partial state of despair in the environment of uncontrollable visions and voices is not shamanic trance. Just as does not represent the shamanic consciousness, the shamanic journey cannot be initiated in such a state.

In the shamanic journey, a certain percentage of consciousness is constantly in the body’s physical environment, aware of what is happening there. It is possible to hear a sudden noise in the room. This awareness is what it should be, it does not prevent you from traveling a shamanic journey at the same time. By ignoring the distraction, the experience in the altering realm is continued.’

Drumming beat for the shamanic journey

Harner explained the drum playing way that will determine the end of the journey and the need to return to the physical world as follows:

This four-stage play program signals that the journey has come to an end and the return will begin. During this time, as described in detail in this blog post, you ask your guide to bring you back to the tunnel. Thank your spirit guide, and travel back to the ordinary world by traversing the first entryway.

How to do shamanic drumming?

In the documentary, The Way of the Shaman: The Work of Michael and Sandra Harner, a shaman explains this as below:

“Spirits tell you to drum the drum. They tell beat hard, beat fast, beat a long beat, they also tell me when to stop.”

In my sound therapy sessions, when I use shamanic drumming, which occurs intuitively, I experience exactly what he is telling. I am taking the drum because I am told to do so. I am drumming but I am not the one, who is drumming at that time. Sometimes my sound also becomes part of the sound therapy with the drum. Which again, is all happening at the moment, with the facilitation of something different than mine.

If you are leading a shamanic journey or starting to experiment on shamanic drumming while drumming you will need to invite your spirits.

When I do a shamanic journey at home, I use guided shamanic drummings recorded by different people, mostly use the ones of Michael Harner.

Youtube is a great resource to reach shamanic drumming very easily. Below, I am providing you the links to different shamanic drumming recorded by Michael Harner, Sandra Ingerman, Michael Drake, and Frauke Rotwein respectively.

As mentioned in Wikipedia, Michael James Harner was an anthropologist, educator, and author. He founded the Foundation for Shamanic Studies and the New Age practice of “Core Shamanism.” His 1980 book, The Way of the Shaman: a Guide to Power and Healing, has been foundational in the development and popularization of “core shamanism” as a path of personal development for new age adherents of neo-shamanism.

Here you can see a documentary about the works of him:

Author of twelve books, including Soul Retrieval: Mending the Fragmented Self, Medicine for the Earth, Walking in Light, and The Book of Ceremony: Shamanic Wisdom for Invoking the Sacred in Everyday Life and Shamanic Journeying: A Beginner’s Guide.

Frauke Rotwein has explored shamanism and healing extensively since 1993, and has trained in many different cultural approaches such as Dr. Michael Harner, Tibetan Shamanism, Celtic, Peruvian, and North American shamanism and integrates all these practices into heart-centered core shamanism.

Shamanic journeys, shamanic drumming, and all this cosmic view of shamanism is a great way to see the Unity in life.

It is so symbolic that the entrance gate of this cosmic view is via a sound and that sound is made of the connection of 2 different skins: the skin of the hand and the skin of the drum.

As in Bible, it is said, first there was sound.

Enjoy your shamanic journeys and the beat of the shamanic drum to start these journeys, which are always toward you. Because everything that you are looking for is inside you, never outside.

If you enjoy this article, the articles below could also interest you:

Below is a Pinterest friendly photo…. so, you can pin it to your Shamanic Journey Board!