What Is Sufi Music and What Is the Purpose of Sufi Music? 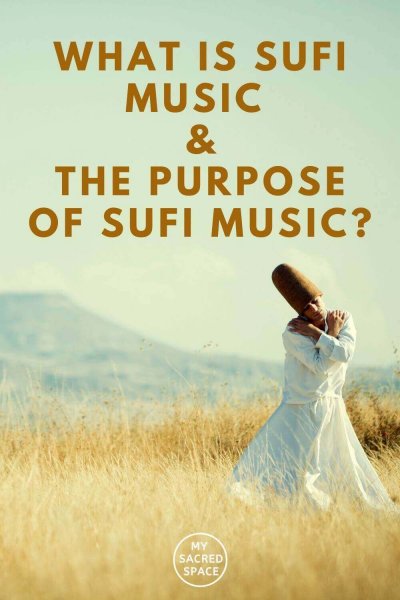 I feel excited and a bit with anxiety. How one can answer the question of What is Sufi Music and What Is the Purpose of Sufi Music? I just tried to give different points of view from my own experiences and especially from the book of my teacher, Jordi Delclos, “The therapeutic dimension of music in Sufism”.

Even though this topic is filling my heart with joy and love, I am humbled and know that I know nothing.

What is Sufi music?

It is the music that contains and conveys the secrets of the tradition and the science of love transmitted through Hermes Trismegistus, who lived in ancient Egypt and was mentioned as the prophet Idris in Islam.

Sufi music is the music that the people who have reached this secret present the secrets of love that cannot be grasped with the mind, by feeding directly from the source, through vibration and words.

As Pythagoras and Plato said, the truth enters the lover’s heart not with a certain teaching, but with music, and this truth is carried over the generations with music.

Lovers are the nightingales of the creator, and they convey what cannot be perceived by the mind, by making people’s hearts vibrate, as a means for them to find it within themselves.

This is what we call Sufi music. At least for me.

“Music is the main means to awaken the soul, there is nothing better. Music is the shortest and most direct way to God.”

Or as my teacher Jordi Delclos put it in his book “The therapeutic dimension of music in Sufism”:

“Sufi music is the door to the world of spirit. Music can entertain and serve different social functions, but it finally has another call: to function as a ladder that links the human with the heavenly world, that is, to help the human kingdom to ascend to the world of the spirit.”

Jordi Delclos, “The therapeutic dimension of music in Sufism”

“According to the Sufis, only a certain type of music is suitable to become support or vehicle for meditation. According to the classification provided by Al-Farabi, music can be classified into three categories according to its impact on the spirit: The first evokes in us a pleasant and delicious sense of peace. The second has the power to stir the imagination, giving birth to images in the soul, suggesting ideas, expressing them. The third class is inspired by our passions.”

Jean During, The Art of Persian music

Sufi music is related to the first two modalities, but never to a type of music based exclusively on the third category.

What is a Sufi song?

Sufi songs are songs that have been handed down through generations. These are the songs created as a kind of channeling by the lovers by staying in touch with Allah.

When you read Sufi songs, the depth of the lyrics surprises you. As your understanding expands, their meanings gradually begin to open within you.

The more you listen and connect with them, the more you realize that they purify you and make you reach the vibrations of the Love and the Truth.

According to Jordi Delclos, apart from the spiritual power of the performer, there is another reason that explains the specific power of Sufi music. That is the form of the music itself.

Indeed, Sufi music is composed according to the tonal system (makam). Based on micro-tones rather than the semi-tone scales of Western music.

This system widens the range of sounds, thus allowing greater subtlety in its effects.

Both the music that was used in its therapeutic aspect in Islamic hospitals (Bimaristan) and that used for spiritual purposes by the Sufis are based on musical scales that are called Makam.

These scales differ from those used in Western music in that they broaden the range of sounds.

Thus, while the Western system subdivides each tone into two possible semitones, the Arabic musical system extends it to four. Moreover the Turkish allows each tone to be subdivided into up to nine possible micro-tones (komas).

What language is Sufi music?

Sufi music’s language is the language of the heart.

During different rituals such as Sema, the Sufi songs that are sung are from different Sufi poets throughout history, many of them are saints, Veli or Asik, who reached the union to God.

For example, in Turkish Sufi music there are many songs from Yunus Emre, Niyazi Misri, Mevlana, Nesimi etc. But it is important to say that the letters are not theirs. They all wrote these letters at the time of ecstasy, so they somehow channeled to this spiritual wisdom and reality.

Moreover, in music therapy sessions, musicians improvise with their instruments, so they are connecting to the abundance of Silence.

Where is Sufi music from?

The central premise is that human music and musical instruments act as intermediaries between the human world and the heavenly world.

“Pythagoras told that his soul had risen to the upper world. Thanks to the purity of his being and the divination of his heart, he had listened to the melodies of the Spheres and the sounds produced by the movements of the stars, while he perceived the discreet resonance of the voices of his Angels. He later returned to his material body. What he had heard determined musical relationships and perfected the science of music.”

Our music, terrestrial music, is but the imperfect reflection of the celestial, but its hearing evokes in souls the memory of its first origin and awakens love for that high place. High music can thus awaken reactions of a spiritual order, but they were waiting to be aroused.

“Music to heal was brought back to man many times in dreams, and music has been a part of dream cures for disease.”

Here I would like to mention what I have heard from my teacher Jordi Delclos. In Turkish Sufi music therapy, musicians use 6:8 rhythm. Musicians improvise using different makams with this rhythm. According to what I have learned from my teacher, Oruç Güvenç, the teacher of my teacher, who was a Turkish Sufi master, musician, music therapist, ethnomusicologist, and a poet, was very ill one day and in his dream, he heard a piece of very nice music played by this rhythm, 6:8. When he woke up from his dream, his illness was completely gone and after that, he began to use this rhythm in music therapy.

What is the purpose of Sufi music?

Here I will report some of the purposes of Sufi music as I have read in the book my teacher Jordi Delclos called “The therapeutic dimension of music in Sufism”:

“Gazali says that the heart of man contains a hidden fire that is evoked by music and harmony, and transports man beyond himself in ecstasy.”

Music is a way of access to this universe, a quick way to pass from one plane of reality to the other. Let us, therefore, see that external hearing is nothing more than a means to awaken internal hearing.

The concrete sounds thus carry a hidden message, and the mystic can come to perceive in each melody the voice of the Beloved.

The ability to convey meaning or information to the listener. Music brings images to us from the subconscious, and they provide a connection

We know that Sufi music has been used for therapeutical cases in many hospitals around the Middle East and Anatolia. Evliya Çelebi, a Turkish traveler, who visited one of these hospitals in 1652 in Kayseri wrote that:

“Ten vocalists and instrumentalists work at the hospital. Three of them are vocalists, one of them neyzen, one kemancı, one musikarcı, one santurcu, one çengi, one çeng santurcu, one udçu, and they come three times a week to play for the sick and the insane. They relax and find satisfaction with the sound of this God-oriented orchestra. In fact, makams like neva, rast, dügah, segah, çargah, and suzinak are common. Also, the makams zengüle and buselik nourish the spirits of the patients.”

One of the most important elements in Sufi music is the spiritual maturity of the person making the music. Therefore, people who perform Sufi music are first and foremost Sufis.

Music allows emotions to be expressed. Expressing emotions also bring harmony and health to our lives.

May this music which comes from another reality to us and fills our hearts with Love, guide you in your journey.

Where Did Sufi Music Originate and Come From?

Below is a Pinterest friendly photo…. so, you can pin it to your Sufi Music Board!