What Phoenix Means and What Does Phoenix Represent? 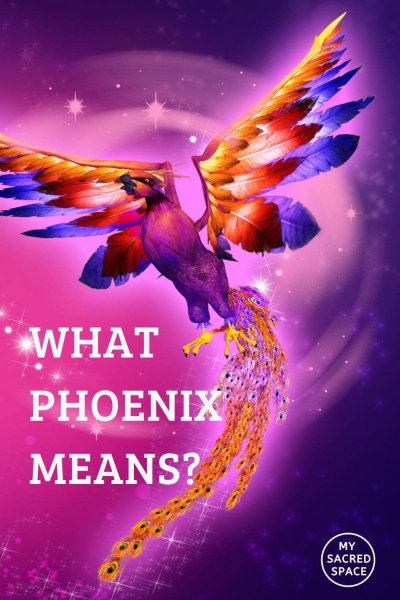 How can one know What Phoenix Means and What Does Phoenix Represent? Phoenix is a powerful symbol from our collective unconscious and how we can understand its messages for us.

The answer is by trusting and having certainty. When you begin to have a relationship with your spirit animal, while your relationship becomes more profound and more rooted, so does your trust and your intuition.

That is why I am writing this article just after a shamanic journey with my beloved spirit animal, phoenix.

This one article has evolved to another five pieces more, as it is so hard to explain the symbolization of the phoenix. You can check those other articles below as well:

So let’s start to listen to the answers from my spirit animal phoenix’s wisdom.

Which animal is the phoenix?

The phoenix is an immortal bird associated with Greek mythology (with analogs in many cultures) that cyclically regenerates or is otherwise born again.

What does a phoenix spirit animal mean?

Spirit animal phoenix has the synonyms of phoenix bird spirit animal or phoenix animal spirit guide. It is the spirit of the phoenix which is guiding you in your life journey.

So this article is written as a result of my investigation. Additionally, and most notably with the wisdom of my spirit animal, the phoenix.

Can you turn into your spirit animal?

When I turned into my spirit animal, phoenix, I realized that he was not existing. What does this mean? He was incredibly light; that is why he could be everywhere and nowhere.

He was like Khidr, was helping everybody in need, he was the servant of God. And in this process, he was so joyful, enjoying each moment of the adventure with wonder and excitement. He did not have any attachment or expectation about the outcome at all.

The phoenix was so beautiful, and the more he was becoming non-existent, his beauty was incrementing.

He had a tail from fire, eyes with changing colors, and colorful feathers.

Anqa knew the most purifying spaces in the world, dreaming the most incredible, or better to say, those dreams were coming to him because he did not exist in the sense that we knew.

What does a phoenix symbolize spiritually?

Phoenix symbolizes recovery and hope. Dying before dying, being free from attachment to the outcome.

Phoenix symbolism has been inspiring us in the song lyrics. These lyrics can also give us an idea about the symbolic meaning of the phoenix.

For example, Robbie Williams has a song called “Phoenix From the Flames.”

Phoenix from the flames

We will rise together

They will know our names

Can you feel it?

Shelter me from pain

I always wanna feel this way

Phoenix symbolism is used heavily in the music video for “Marry the Night” by Lady Gaga, particularly in the final scene.

In the song, Lady Gaga says: “I want to be a star because I do not have anything to lose.”

So finding your liberty and dying before dying is an essential part of the symbolism of a phoenix.

In the Star Trek universe, the phoenix is the name given to the first artificial spacecraft to travel faster than light.

It is named phoenix because, in the Star Trek timeline, the Earth was still recovering from the ravages of World War III and represents a reborn and bright future for humanity.

What is the spiritual meaning of a phoenix, and what does a phoenix mean spiritually?

When I was talking to my spirit animal in my shamanic journey, he told me quite inspiring thoughts about its spiritual guidance and why he chose me.

Typically, at the beginning of our shamanic journey, he always brings me a secret hidden place full of waterfalls, where I have a bath and purify myself.

In a way, this is like a getting-ready ritual for our shamanic journey.

We were there again.

This time, he brought me up on the mountain beside the waterfalls.

I saw the world from away, as I saw once with Yunus Emre, during a music therapy session I attended before the Sufi sema gathering in Barcelona.

He said to me, look at this.

You are the one who has seen and lived this experience.

Do whatever you do to leave the doubts in you.

Find that quiet and spacious place inside you where you can reflect what you have inside.

Then he continued: What the anqa bird says by dying before dying means BE.

Here he signed me different inspiration from different writers, scholars, and philosophers:

He told me with the inspiration of Ibn Arabi: Do you exist, you are afraid of disappearing?

Then Joseph Campbell joined the conversation:

“The research for physical immortality proceeds from a misunderstanding of the traditional teaching.

On the contrary, the basic problem is to enlarge the eye’s pupil so that the body with its attendant personality will no longer obstruct the view.

Then one can experience immortality as a present fact: “It is here! It is here!”

And from there, he made me walk through the concept of Ta’wil by Ibn Arabi and Corbin:

“The symbolic nature of reality thus implies that there is another, more real world. Ibn Arabi says that the logical world around us, the so-called fact, is nothing more than a dream.

However, as Izutsu points out, this does not mean that dream, illusion, or imagination is simply something wrong and worthless, but their meaning is a symbolic reflection of something real.

The roots of this understanding are, in the following hadith, “people sleep, but they wake up when they die.”

Ibn Arabi states that the Prophet emphasized that what man perceives in this world is the same as a dream for the dreaming man and must be interpreted as such.

First, one acknowledges that everything that man sees throughout his earthly life is in the same order as the visions in dreams.

Everything in this world thus rises to the level of active imagination, interpretation, science, and expression are needed to serve Theophany talent.

And to direct them to their hidden forms (batin) so that the Hidden manifests itself ‘in reality.

It is called ‘ta’ will ‘and its application through “Active Imagination” is unlimited.

The Prophet, therefore, prayed as follows:

“O God, increase my science (ilim)” so that he applied ta’wil and to be able to unravel the symbolic and mystical interpretation of everything offered to him.

… For Ibn Arabi, the expression’ die and awake’ that appears in the hadith that man must die before he dies is a symbolic reference to the act of interpretation (ta’wil) understood in this sense.

“Leaving this world, entering the real world will mean darkness and doubts will break away.

Then, finally, the consciousness passes from childhood (hal-i tifuliyya) to maturity.”

Then my spirit animal phoenix added, the way of ta’wil is to be.

Your connection is powerful. Connect to yourself. Be.

What does it mean if your spirit animal is a phoenix?

At this point, I have asked him, why did you come to me as a spirit animal?

He said you were alone in the middle of the crowd, and you needed to connect to yourself.

I am the spirit animal of those who have a strong heart connection and love the created ones because of their love for the Creator.

Reminding those who have solid visioning power to let it be and enjoy the life—living the life as their intuition whispers to them, in its simplest form.

You are guided with the vision of those adventures, but you are the one who is going to live them.

Do not give importance to what others think or believe.

Because without sharing, you will not be in relief. This sharing call is inside you.

If you believe you will live. Focus and live.

You can get guidance from the animal spirit deck and guidebook from the wild unknown, including a phoenix spirit animal card.

I sit down to write an article around what phoenix spirit animals symbolize and represent, but I have witnessed during the process how hard it is.

That is why I have ended up in 6 articles, and still, I am not sure if I could explain a bit of the symbolization of the phoenix.

That is the reason why life is guiding us with symbols. Symbols are the language of the soul.

The heart understands the unspeakable via the symbols.

My dear phoenix or anqa or zümrüdü anka as in my mother language,

My beloved, I adore you.

Thanks for all your guidance.

I am asking God for an open heart and mind to be able to understand your guidance clearly.

If you are interested in the topic, definitely check these articles: