Where Did Sufi Music Originate and Come From? 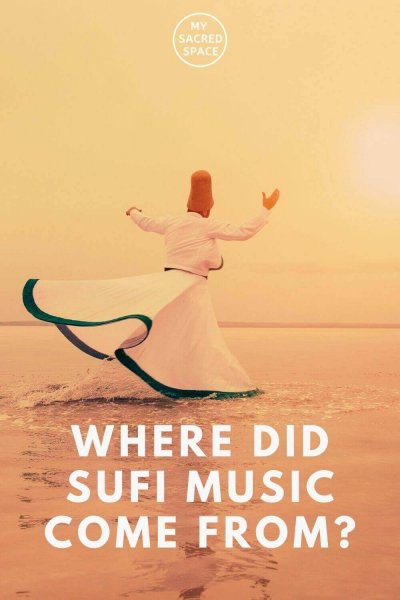 Sufi music is a door opener to connect with your spirit. Sound has been always told as the first ingredient in the creation mythologies of different cultures. So the sound has some secrets to reveal. What is a better way to reveal these secrets than Sufi music? Answering the question Where Did Sufi Music Originate and Come From can help you reveal some of these secrets of human history.

I just love and adore this topic. So let’s start with great energy of wander. Are you ready? Come and join me. Yayyyyyyy

Where did Sufi music come from?

Sufi philosophers did not start their studies on music from scratch. They built on the ideas of Greek philosophers.

The Orphic Greek tradition was thus repeated, developed, and adapted by Muslim philosophers.

Fadlou Shehadi says in his book “Philosophies of Music in Medieval Islam” that;

Greek influence can be centered around 3 major sources:

If we look at where the inspiration for these Greek philosophers came from, we see Ancient Egypt.

We can talk about 5 great masters and philosophers who brought the wisdom of Egypt to Thrace and Macedonia and the land of Greece.

All philosophies say the same essence in other ways. Turn around and look at yourself.

In ancient Egyptian wisdom, we are talking about Hermetic wisdom. Hermetic tradition, a tradition of the Prophet Idris. According to Wikipedia:

“According to ancient texts, Hermes-Thoth was also the sage who lived in Ancient Egypt. Hermes-Thoth, who is also seen as an excellent scientist, played an important role in alchemy. Hermes-Thoth was an initiate to some, a prophet to others. Ancient Greek texts refer to the sage Hermes-Thoth as the founder of magic, alchemy, astronomy, medicine, and wisdom. In these texts, he is referred to as “Hermes Trismegistus” meaning “Hermes the thrice great”. To be distinguished from other Hermes, this sage is often written as Hermes Trismegistus. The Egyptians, on the other hand, deserved the title of “Trismegistus”, meaning great three times, because he was both a king, a high priest and a founder of religion at the same time. According to James Churchward, he was an Atlantean sage who brought the monotheistic religion of Mu and Atlantis to Egypt around 16000 BC. Some researchers, such as Murry Hope, argue that the monotheistic religion in these lost continents is the Sirian culture, that is, Sirius-based teaching. According to some, this Hermes-Thot is mentioned as the Prophet Enoch (Enoch) in the Torah and the Prophet Idris in the Qur’an.”

The secret of Hermes, who also wrote on emerald tablets, is as follows; I am my word and my vibration. He says everything vibrates. The source of the vibration is the word.

Jordi Delclos defines a similar theme in his book “The therapeutic dimension of music in Sufism”:

“The idea of ​​the creation of the universe through an initial sound is also common to other cosmogonies. For example, the Egyptians believed that the god Thot had created the world with his voice. And the Persians and the Hindus affirm the musicologist Marius Schneider, ‘believed that the world had been created by an initial sound that, emerging from the abyss, first became light and, little by little, part of this light became matter. But this materialization was never completely complete since each material thing continued to conserve more or less sound substance from which it was created.

According to that, there is in all created a piece of inaudible music that permeates everything. All matter is perpetually in a state of vibration. Absolute hearing, then, implies that even the sounds of the natural world can carry a hidden message.

Ruzbihan of Shiraz, During points out, evokes a spiritual station where God speaks through the sound of birds and other animals and even the sound of the wind.

However, this high degree is only granted to the saints or friends of God (wali), because when they are in the state of unification, God speaks to them through all His creatures.”

At this point, we see the theme of ‘man can only be reminded’ in the discourses of Plato and Pythagoras. In philosophy, it is called a priori. Apesteori-experiments and apriori-innate knowledge.

The poets have always made a call. They believed that ‘He knows himself. He remembers. Make your call. Let it reach the one who will wake up and will be connected to the Light.’ It was like sowing seeds for them.

Orpheus had a 7-stringed lyre. Orphics wander from village to village to spread the pleasure and secret of love. The truth was and will always be preserved in sound and vibration.

There is no didactic dictation. Tradition has passed with “Sohbet, Mohabbat” (conversation).

There is no sanctification of knowledge in the sages. The mind wants to understand. It’s not something to be understood. It is impossible to tell with the mind. The traveler poets were inviting people to connect with themselves, as it was the only place to meet the Truth.

Where did Sufi music originate?

Jordi Delclos Casa in his book called “The therapeutic dimension of music in Sufism” informs that,

Pythagoras’ ideas can be found primarily in the thoughts of writers such as al-Kindi, the first Muslim philosopher, or in the work of a group of thinkers called The Ikhwan al-Safa (Brethren of Purity) who lived in Basra in the 10th century.

On the other hand, Aristoxenus influenced Farabi and Ibn Sina.

Finally, Platón and Aristóteles influenced all thinkers. However, the influence of Aristotle can be seen especially in Farabi.

We know that since ancient times, Greek philosophers have used music and dance for therapeutic purposes. We know that Pythagoras, who lived in Ancient Greece in the 6th century, was a messenger in this area.

According to Iamblichus, we know that Pythagoras and Empedocles were masters of music therapy.

‘So, Pythagoras seeks a highly effective help: the correction of the characters and lives of men through music.’

Iamblichus, On the Pythagorean Way of Life

Likewise, Plato, who lived in the period after Pythagoras, has a great contribution in this field. He mentions the importance of music in his work Republic.

‘It is not for this same reason, my dear Glaucon, I said, music is the main part of education, because, from very early on in the soul, rhythm and harmony take hold of it and make grace and beauty enter it as a necessary result, as long as I know of this part of education how it should be given since the opposite happens when it is neglected? And also because, educated a young man who agrees, in music, will notice with the greatest accuracy what is imperfect and defective in the works of nature and art, and will experience in his sight a just and painful impression; for the same reason he will praise with enthusiasm the beauty that he observes, he will give it entry into his soul, he will nourish himself with it, and he will become, by this means, excellent; while in the opposite case it would look with contempt and with a natural aversion the unseemly; And as this will happen from the most tender age, before the light of reason illuminates it, as soon as it has appeared, you will see it coming with more joy than anyone when recognizing it as something familiar. ‘

After the Greek thinkers, one can look at the science of music developed by Islamic philosophers who lived between the 9th and 15th centuries.

It begins with al-Kindi in the 9th century and ends with Ibn Khaldun in the 15th century.

‘That is, those philosophers examined the place of music in the general scheme of things; its relationship with the parts of the Cosmos, such as the natural elements, the numbers, the celestial spheres, or the seasons. Finally, they were interested in the relationship of music and its effects on the biological constitution, such as the humor of the body, and its effects on our psychological traits, such as emotions and character, and its influence therefore on behavior and mood, and health.’

Jordi Delclos Casa, The therapeutic dimension of music in Sufism

In the history of Islam, there are important references such as Abu Bakir Razi (854-932), al Farabi (870-950), and Ibn Sina (989-1037), who besides doctors and philosophers were also musicians and musicologists themselves.

Sufi music is a journey. So one can not expect for all these secrets of Sufi music will reveal to us suddenly or maybe even at all. Humbleness, patience, wonder, and joy are the ingredients of life we need in this journey of Sufi music.

I have read once that a story about Dede Efendi. According to Wikipedia he was “One of the greatest Turkish composers, he has created masterpieces in all forms and modes of Turkish music. He has also developed the composite musical modes of “sultanî yegâh”, “nev-eser”, “saba-buselik”, “hicaz-buselik” and “araban kürdî”. His greatest works are the seven Mevlevi pieces for Samah. More than two hundred of his compositions are available today.”

On his bed just before his death, his student to calm him said that he had an incredible life where the secrets of the music were revealed to him. He replied that he was merely at the entrance point of the doors of music.

So let’s all enjoy my friends with our hearts full of gratitude to those who passed this heritage to us.

What is Sufi Music and What Is the Purpose of Sufi Music?

Below is a Pinterest friendly photo…. so, you can pin it to your Sufi Music Board!