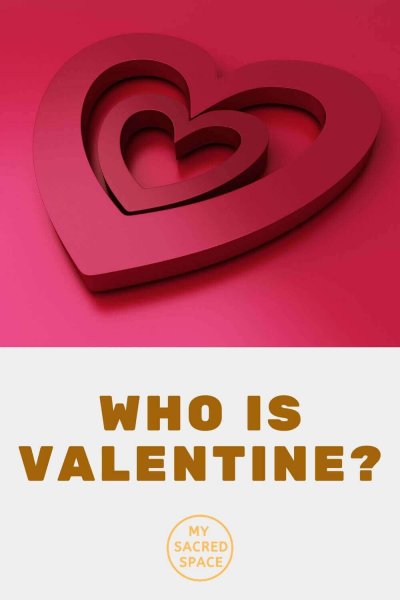 Saint Valentine’s day is celebrated all around the world. But wait a minute, who is Saint Valentine? Why are we celebrating this day as the day of love? What is so special about him?

Have you ever asked these questions to yourself?

I am inviting you to the curious world of Sant Valentine to discover his life story and miracles of love.

What is the real story of Valentine’s Day?

It is hard to know the real story of Valentine’s day.

There are different thoughts around the origins of this celebration. It varies from Lupercalia to Saint Valentin’s stories.

Here, you can read more about the origins related to Lupercalia in this article: Why Do We Celebrate Valentine Day?

In this article, we are focusing on understanding who Valentin is.

Who is Saint Valentine’s day named after?

Ok, it is not easy to answer this question either because more than one saint Valentin in history.

How many Saint Valentines are there?

While it can’t be proved historically, seven men named Valentine were honored with feasts on February 14.

Which Saint is Valentine’s day based on?

Of these men, two stories link incidents that could have given our present-day meaning to St. Valentine’s Day.

So such a character lived previously. So let’s try to understand better saint valentine’s life story.

What is St Valentine famous for, and why is Saint Valentine associated with love?

Saint Valentine is famous for his relation to love.

He was a kind of protector of love and justice. Let’s discover how.

When and where was Saint Valentine born?

What was Saint Valentine’s job?

Valentine was a priest during the reign of Emperor Claudius.

Valentine was respected by the young and old, rich and poor, with people of all walks of life attending his services.

What happened to Saint Valentine?

Emperor Claudius was heavily recruiting men to serve as soldiers for his wars without much success.

The men preferred not to leave their wives and families.

Claudius became angry, declared that no more marriages could be performed, and canceled all engagements.

Why was St Valentine imprisoned?

Valentine thought this to be unfair and secretly married several couples.

When Claudius found out, he threw Valentine in prison, where he died.

Friends of the priest retrieved his body and buried it in a churchyard in Rome.

Saint Valentine, how did he die?

Several versions of the story tell that Saint Valentine had been killed.

Some versions say that Claudius had killed Saint Valentine.

Why was Saint Valentine killed?

What miracles did Saint Valentine perform?

While Valentine was in prison, he cured a jailer’s daughter of blindness. Claudius became enraged and had Valentine clubbed and beheaded on February 14, 269 A.D.

In the website Catholic online, the death of Saint Valentine is explained in a detailed way as such;

“While under the house arrest of Judge Asterius and discussing his faith with him, Valentinus (the Latin version of his name) examined the validity of Jesus.

The judge put Valentinus to the test and brought him the judge’s adopted blind daughter.

If Valentinus restored the girl’s sight, Asterius would do whatever he asked. So Valentinus, praying to God, laid his hands on her eyes, fixing the child’s vision.

Immediately humbled, the judge asked Valentinus what he should do.

Valentinus replied that he should break all of the idols around the judge’s house and that the judge should fast for three days and then undergo the Christian sacrament of baptism.

The judge obeyed and freed all the Christian inmates under his authority as a result of his fasting and prayer.

The judge, his family, and his forty-four-member household of adult family members and servants were baptized.

Valentinus was later arrested again for continuing to evangelize and was sent to the prefect of Rome, to the emperor Claudius Gothicus (Claudius II) himself.

Claudius liked him until Valentinus tried to convince Claudius to embrace Christianity.

After that, Claudius refused and condemned Valentinus to death, commanding that Valentinus either renounce his faith or be beaten with clubs and beheaded.

Valentinus refused, and Claudius’ command was executed outside the Flaminian Gate on February 14, 269.”

Who did St Valentine fall in love with?

Yet another story claims that Valentine fell in love with the jailer’s daughter and wrote her letters that were signed “From your Valentine.”

How old was St Valentine when he died?

“His relics were kept in the Church and Catacombs of San Valentino in Rome, which “remained an important pilgrim site throughout the Middle Ages until the relics of St. Valentine were transferred to the church of Santa Prassede during the pontificate of Nicholas IV.”

His skull, crowned with flowers, is exhibited in the Basilica of Santa Maria in Cosmedin, Rome.

Other relics of him were taken to Whitefriar Street Carmelite Church in Dublin, Ireland, where they remain; this house of worship continues to be a popular place of pilgrimage, especially on Saint Valentine’s Day, for those seeking love.”

Is Saint Valentine in the bible?

No, there is no mention of Saint Valentine in the Bible.

How did Saint Valentine become a saint?

All of the seven Valentines eventually evolved into one. In 496, Pope Gelasius declared the day in honor of St. Valentine.

How did saint valentine make a difference in the world? Why is Saint Valentine important?

Saint Valentine acted as the protector of love against the injustices. He was brave to bring together those who were in love.

So he became the patron saint of engaged couples and anyone wishing to marry.

Saint Valentine’s day is related to love, and the story of Saint Valentine affects it. Moreover, Lupercalia rituals and other pagan traditions.

To be more connected with the energies of this particular day, I invite you to read our other articles:

Why Do We Celebrate Valentine Day?