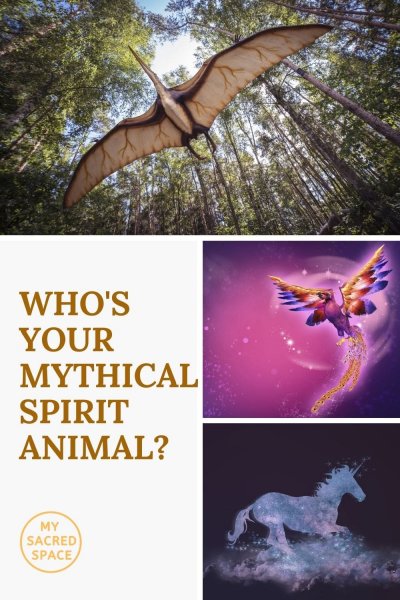 The answer is not an easy one. Your intuition will guide you. So be aware of your interest.

When you show particular interest in any mythical creature, please pay attention to them and try to learn more.

Take a shamanic journey or do deep meditation. Meanwhile, join us for a fascinating adventure in the world of mythical creatures.

What are the 5 Mythical Creatures?

Mythical creatures have always fascinated me. Their magical powers and strength are desirable to many, aren’t they?

Different cultures around the world have various mythical animals. Here are the most powerful and popular five mythical creatures:

Most of these creatures are present in various cultures. Besides these, Greek & Chinese mythology is quite popular around the globe. So, I have added a list for those specific mythologies too.

Is a Phoenix a mythical creature?

Phoenix is a mythical creature and immortal bird associated with Egyptian and Greek mythology. Though it’s eternal, it can die. After dying, it is reborn from the ashes; that is why they are immortal.

According to the mythologies, the Phoenix lived in paradise and had 1000 years before being reborn. The most common tale is:

The Phoenix came to our mortal world in his final days of life.

It collected spices and herbs from Arabia and then went to Phoenicia, waiting for the sun to rise.

When the sun god began to drag its chariot around the sky in the morning, the Phoenix started singing a farewell song.

The song was so good that even the sun god stopped to hear it. After the song’s end, the sun god restarted the chariot, which caused a spark to drop on the Phoenix and turned the bird into flame.

Three days after the incident, the Phoenix was reborn from the ashes and started its 1000-year life cycle.

All these articles below can help you to know better the fascinating world of Phoenix;

Is Yali a mythical creature?

If you ever visit South India, you will see a figure of Yali carved on the temple wall. Is it a mythical creature?

Yali is a mythical creature from South Indian Hindu Mythology whose body consists of a lion, elephant, and horse. However, Indians believe Yali is more powerful than these three animals.

We all know that dragons are one of the most powerful mythical creatures. But do dragons have magical powers?

Yes, most cultures represented dragons with magical powers, and in some mythologies, dragons can cast magic spells too. Dragons are immune to mind control due to their magical powers.

Asian cultures believe that dragons can change their shape, mainly to the human body, if they want.

The blood of dragons in Western mythologies has magical properties.

What is the evilest creature?

Basilisk is one of the evilest mythical creatures across cultures. The mythologies explain that you will be dead even if you look at its eye.

Besides Basilisk, Medusa, Kraken, Hydra, and Dybbuk are some of the evilest mythical creatures. However, their characters may do evil deeds, but their superior abilities offer you excellent spiritual powers.

What is more powerful than a dragon?

Does that mean no creature can defeat a dragon?

What can beat a dragon?

Ichneumon can beat a dragon. It might not be as powerful as the dragon, but it’s cunning. When an Ichneumon sees a dragon, it covers itself with mud and closes the nostrils with tails, and attacks the dragon to kill.

Many say that the Ichneumon is the ancestor of the present-day mongoose, the sworn enemy of snakes.

What are the most powerful mythical creatures?

Phoenix is a mythical creature who is immortal and believed to represent life.

As I explained in the beginning, phoenixes can be reborn from ashes. Hence, it often refers to the meaning, a new life.

What is my mythical spirit animal?

You can read here Phoenix’s representation in more detail.

Can your spirit animal be a mythical creature?

Yes, your spirit animal can be a mythical creature.

But if you ask which mythical creature is your spirit animal, that is not easy to answer.

There can be numerous possibilities, and you are the one who can find yours.

You can go on a Shamanic Journey to find your spirit animal and communicate with it for spiritual guidance.

You can read The Book of Mythical Beasts and Magical Creatures to get familiar with the animals.

Following are some mythical creature spirit animals that may appear to you:

Can your spirit animal be a unicorn?

Unicorns are sacred animals and have healing power. They can lead you to freedom.

A unicorn may appear as your spirit animal when your spirit needs independence. It can heal your soul and guide you to a better path in life.

You can read here more about the Unicorn spirit animal.

Can your spirit animal be a dragon?

Are you wondering if the mighty dragon can be your spirit animal?

Yes, when you need power and strength to fight evil, a spirit animal dragon may visit you. It can help you to get rid of any obstacles in life.

You can read here more about the Dragon spirit animal.

Can your spirit animal be a phoenix?

You can read here more about the Phoenix spirit animal.

Instead of spirit animals, J.K. Rowling uses “Patronus” in the Harry Potter book.

Harry Potter’s Patronus is a Stag, Hermione’s an Otter, and Ron Weasley’s a Jack Russell Terrier.

A person’s similarities with any animal or sometimes past experiences determine his Patronus.

The Patronus charm is first introduced in the Harry Potter book. It is a protective spell wizard cast to defend themselves against dementors.

The main difference between a spirit animal and a Patronus is how they help you.

A spirit animal will guide different life situations to lead a better life.

At the same time, a Patronus will help you defend yourself from evil beings.

The Fylgjur is a spirit animal in Norse mythology. It appears to children after their birth, and the characteristics of this animal are shaped with its owner traits.

The Fylgjur can appear to you in various animal forms, such as a fox, dog, or cat.

However, Norse Gods have their personal spirit animal and not a Fylgjur.

For example, Odin is associated with wolves, and Thor is with goats.

Pepita is the spirit animal in Coco that belongs to Mama Imelda.

It is inspired by the Mexican art of Pepita, whose body consists of different parts from jaguar, eagle, lizard, and several other animals.

Mythological creatures can also be your guardian. They have immense power that can protect you from evil energies.

What mythical creature is your guardian that guards your soul?

All these mythical creatures, as spirit animals, can be your guardian that guards your soul.

Moreover, from these legendary creatures, there are some that their primary purpose was protection. Maybe your guardian could be one of those;

Griffin is a guardian from Greek mythology that guards treasure and priceless possessions.

Griffin is a legendary creature with the body, tail, and back legs of a lion, the head and wings of an eagle, and sometimes an eagle’s talons as its front feet.

Cerberus is from both Roman and Greek mythology. It is a multi-headed dog with a serpent for a tail and snakes protruding from multiple parts of its body.

Cerberus guards the gates of the Underworld to prevent the dead from leaving.

Black Tortoise is the of the north and Vermilion Bird of the South.

Or could be any other which is not on this list. Let your intuition guide you.

What Celtic mythological creature are you?

A Celtic mythological creature can be your spirit animal.

There are many Celtic mythological creatures.

There are many fairies, Goddesses, or guardian spirits inside the Celtic mythological creatures.

Whatever group you are feeling connected to, trust your intuition and get more information about them.

So there is no one answer to the question of who is your mythical spirit animal. But definitely, yes that mythical animals can be your spirit animals.

If you are here, reading this article, it is for a reason. So trust your intuition and continue to search for it.

These articles below can help you for your soul search journey;