Why Do We Celebrate Valentine Day? 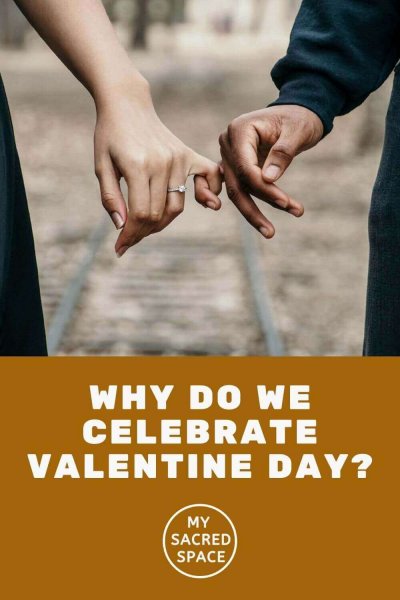 The real reason we celebrate Valentine’s Day is hard to answer, as the origin of this day is quite blurred.

When I searched the origins of Saint Valentine’s day, I came across many different rituals and fests from ancient Roman times and even before.

Februalia, Lupercalia, Imbolc, Beltane, Carnaval, and the Christian feast of Saint Valentin can be named.

Join me to discover the origins of Saint valent. Let’s start. Shall we?

Where did Saint Valentine’s day come from?

Because of the synthesis characteristic of the Roman Christian empire, meaning that they were keeping the traditions with new names, it is essential to look at the celebrations in ancient Rome and pagan cultures around February time of the year.

One of the most ancient celebrations during February was the Roman festival “Februalia”. Actually; the month takes its name from this festival.

Februalia was a ritual of purification at the end of the Roman year.

This festival offered a chance to honor the gods and the dead and for people to purify themselves in preparation for the coming year.

Purification was a common theme for rituals and celebrations at this time of the year.

A much better known Roman celebration is “Lupercalia,” variously cited as beginning on February 13 or the last full moon of the Roman year.

Lupercalia is generally believed to have supplanted Februalia.

Februalia is an older festival where Lupercalia is better known and long-lived.

Lupercalia festival was about powerful sexual energies as well as purification and cleansing.

According to legend, the twins Romulus and Remus were suckled by a she-wolf named Luperca, who became the totem animal of Rome.

From February 13 to 15, the festivities called Lupercales were celebrated in his honor.

As it was a mid-February fertility ritual, modern Wiccans might view Lupercalia as a blending of Imbolc (new beginnings) and Beltane (fertility).

The idea of spring is quite a new thought. In the past, in Western Europe, people celebrated easier and warmer days and the powerful sexual energy that could be easily witnessed around nature.

The Europeans also believed that on February 14, the birds began to choose their mates. In his “Parlement of Foules,” Chaucer wrote:

“For this was Seynt Valentine’s Day when every foul cometh there to choose his mate.”

Hail Bishop Valentine! whose day this is;

All the air is thy diocese,

And all the chirping choristers

And other birds are thy parishioners:

The lyric lark and the grave whispering dove;

The sparrow that neglects his life for love,

The household bird with the red stomacher;

As doth the goldfinch or the halcyon . . .

This day more cheerfully than ever shine,

What does Lupercal mean?

The central ritual Lupercalia took place at the foot of the hill where Romulus and Remus, the legendary founders of Rome, were suckled by a she-wolf in a cave called Lupercal.

So Lupercal is the cave’s name, and Lupercalia is the feast’s name.

What is the feast of Lupercalia?

The ritual celebration of Lupercalia included sacrifices to the deities.

Afterward, strips of the hides of the sacrificed were cut and given to naked or loincloth-bearing young men.

They then ran throughout the ritual area using the hiding strips as whips to strike people.

This was a rite performed as a fertility blessing, and many young ladies beckoned and even lined up so they’d be sure to be found and hit with the whip.

The belief was that if they received lashes, doing so would increase fertility and ease the pain of childbirth.

The ritual continued to be celebrated in Rome until 494 CE when a Christian feast was declared on that day.

What did Lupercalia celebrate?

In his book Imbolc: Rituals, Recipes, and Lore for Brigid’s Day, Carl Neal says that;

The worship of these deities significantly predates the Roman Empire, and some of that ancient energy can be felt in the primal nature of this holiday.

Faunus is a wild spirit who embodies primitive sexual drive.

A horned god bestows the ability to see the future or psychic abilities.

He does so in ways that often seem frightening, such as nightmares.

Faunus is sometimes confused with Pan because their physical appearances can be very similar.

Juno is an ancient goddess of time.

She is the protector of women, making her an excellent counterbalance to the unchecked sexual energy of Faunus.

Being a protector of women of all ages, Juno is also the goddess of fertility and birth.

She is a healer, but her work is focused on women’s health issues only.

Juno has existed in different aspects at different times. However, as Juno Februa, she was directly tied to the Februalia ritual.”

When did Lupercalia start?

Here you can see the translation of his findings;

“The origins of the Lupercales, in reality, are not at all clear and are sometimes contradictory.

The most detailed texts we have on these festivals date from the imperial era and come from three authors: the historian Dionysius of Halicarnassus and the poet Ovid, who lived during the principality of Augustus; and the writer Plutarch, almost a century after them.

These offer us two different versions of this festival that dates back to the city’s origins, that is, between 700 and 800 years ago.

According to Dionysius and Plutarch, it was an ancient Greek rite from the region of Arcadia.

It is dedicated to the god Pan Lyceus, lord of nature, and wild animals, particularly wolves and goats.

This version initially consisted of a race in honor of the god to ask him to keep the wolves away from the herds; hence, the participants dressed in goatskins and wolf masks.

On the other hand, according to Ovid, its origin would go back to the times of Romulus, the founder of the city.

According to a legend, during his reign, there was a prolonged episode of sterility among Roman women, so they made a pilgrimage to the sacred forest of Juno, the goddess of the hearth.

She would have replied that they should be “penetrated by the sacred male goat,” alluding to the Faun god Luperco, the divinity of flocks and forests.

An Etruscan augur interpreted the prophecy, sacrificed a goat, and hit the woman on the back with its skin; she gave birth after ten moons (about nine solar months).

According to Plutarch’s detailed description, the festivities began with sacrificing a goat and a dog in the Lupercal cave, located on Palatine Hill.

According to legend, Romulus and Remus had been suckled by the she-wolf.

The Lupercos officiated the ceremony; young priests were explicitly dedicated to this cult.

At the end of it, two new priesthood members were initiated, chosen from among the sons of the patrician families.

The two new Lupercos impregnated their foreheads with the blood of the sacrificed animals and with goat’s milk, they tied their skins like loincloths -otherwise, they were naked- and, disguised with wolf masks -or according to other versions, with their faces covered in mud – would run around the Palatine, beating on their way the women they found with the sacrificial skins.”

Amel G.M continues in the same article that the Church finally replaced the Lupercalia and converted it to Saint Valentin.

On the other hand, that energy came up again in the festivals of Carnaval, which is happening before Lent time.

Those who did show great concern about that spectacle were the Christian priests, especially since the sacrifice of animals was a redoubt of paganism: Pope Gelasius I stated that only “the vile rabble” would participate in such a festival.

Despite this, the Lupercales survived until the end of the 5th century, being one of the last Roman festivals to be replaced by Christian celebrations.

The Church tried to replace it with various festivities such as that of Saint Valentine, a third-century saint who, according to legend, was executed on February 14, or that of the Purification of the Virgin, on the 2nd of the same month.

However, the character of the Lupercales found a new way of expression in Carnival, a famous festival born from the Dionysian cults and with a vital sexual component.

Hence, it married very well with the idea of ​​promoting fertility.

The classic costumes, with masks and elaborate clothes, had the purpose of protecting the identity of those who wore them and were far from the image of the Lupercales, which is why the Church finally had to accept – albeit reluctantly – that party as a “period of leave” before the start of Lent, a time of abstention from carnal desires before Easter.

It seems that collective consciousness somehow appears in another way even though there are prohibitions around the same energies to vibrate.

The circle finds a way to be closed.

As it is happening in the case of Lupercalia and Carnaval.

So if we go back to the article’s central question, why are we celebrating Valentin?

To celebrate that creative, fertile, sexual, and sacred energy that we are witnessing inside ourselves and around in nature.

Even though the feast’s name is changing, the real reason for the celebration is staying the same.

Do not forget to check our other articles about Saint Valentine’s day;