Yggdrasil Tree and the Tree of Life Symbol Meaning 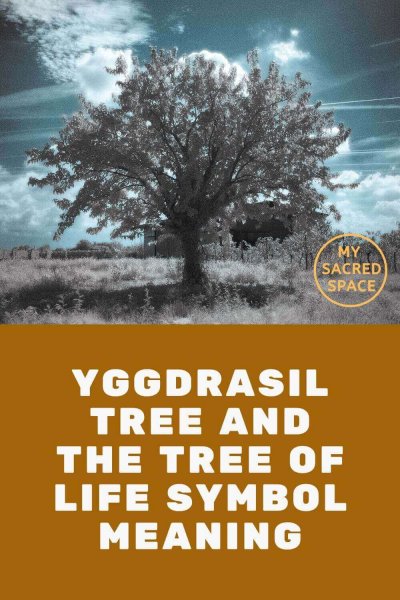 The Yggdrasil tree and the Tree of life symbol meaning are closely connected. They represent the whole universe and also the cycle of life.

Besides, they have a tremendous spiritual significance for your spiritual journey. But what do these trees mean, and what do they signify spiritually?

What is a Yggdrasil tree?

The Gods get together at the Yggdrasil for a governing assembly. It is a sacred tree in Norse mythology for how it holds the whole universe.

Yggdrasil, what kind of Tree. Is Yggdrasil, a yew tree?

Yggdrasil is an Ash tree, as mentioned in the Poetic Edda. Poetic Edda is s modern collection of ancient Norse poems.

In stanza 19, the völva quotes:

“An ash I know there stands,

Yggdrasill is its name,

Although, due to its structure, many think that the Yggdrasil is a Yew tree, there’s no concrete evidence to prove the statement.

Where is the Yggdrasil tree located?

How many worlds are there on the Yggdrasil tree?

There are a total of nine worlds in the Yggdrasil tree. The nine universes are:

Is Yggdrasil a real tree?

Yggdrasil is not a real tree but a mythical tree found in Norse mythology. The Poetic Edda and the Prose Edda, written in the 13th Century, mentions the Yggdrasil tree.

What does Yggdrasil mean?

The word Yggdrasil came from two words, yggr and drasill. Yggr is one of many names of the God Odin, which also means terrible. And Drasill means horse.

So, Yggdrasil means Odin’s horse, but here it means Gallows. That’s because the legend says Odin hung himself on the Yggdrasil tree to pursue knowledge.

As Yuval Noah Harari mentioned in his book 21 Lessons for the 21st Century, it is interesting that The Brihadaranyaka Upanishad interprets the ritual sacrifice of a horse as a realization of the entire story of the cosmos.

‘The head of the sacrificial horse is the dawn, its eye the sun, its vital force the air, its open mouth the fire called Vaisvanara, and the body of the sacrificial horse is the year … its members are the seasons, its joints the months and fortnights, its feet the days and nights, its bones the stars, and its flesh the clouds … its yawning is lightning, it’s shaking the body is thundering, its making water is raining, and its neighing is voice.’

What does Yggdrasil symbolize?

The Yggdrasil symbolizes the cycle of life, death, and rebirth. It represents the connection between worlds, order of things, destiny, and prophecies.

What is the Norse Tree of life?

Yggdrasil is the Tree of life in Norse mythology. If the Tree shakes or falls, all the worlds on it will fall, and so will the lives in them.

The Yggdrasil is a forever green living ash tree. It is believed to be immortal.

What is the spiritual Tree of life?

The spiritual Tree of life means spiritual development and individual beauty. Like the branches of the Tree growing upwards and strengthening the whole Tree, the Tree of life also helps you to grow your wisdom and knowledge as you go through new experiences in life.

What Tree represents the Tree of Life?

The Yggdrasil tree represents the Tree of Life. Although it originated in Norse mythology, the Celts also followed the same ash tree to make the symbol of the Tree of life.

What is the meaning behind the Tree of Life symbol?

The Tree of life symbol mainly means the growth of life. Like a tree, our life grows slowly.

The more the Tree grows, the stronger it gets. Similarly, the older we get, the more new experiences we get, and the better we become.

The first mention of the Tree of life symbol was found in the Domuztepe excavations in Turkey, which dates back to 7000 BC.

It is believed to be the origin of the Tree of life, and from here, the symbol spread in different cultures in various forms.

What does the Tree of life symbolize?

The Tree of life symbolizes immortality and rebirth. It represents the beginning of a new life with a fresh start.

When leaves dry, they fall from the Tree. But soon, fresh leaves grow and give the Tree a better look. That’s why the Tree of life is connected to rebirth and a fresh start.

What religion is the Tree of life associated with?

The Tree of life is associated with both Judaism and Christianity. Similar trees are also found in Islam.

I will discuss the religious significance of the Tree of life later in the article.

What does the Celtic Tree of life symbol mean?

The Celtic Tree of life symbolizes longevity, strength, and wisdom. It represents the gateway to the spirit world.

The druids believe that the Tree of life connects the world to heaven. Many also thought that a tree was a form of their ancestors.

Natchez people from Native America believe a giant cedar tree connects the world to heaven and the underworld. It is pretty similar to the Tree of life in other cultures.

The Yaxche is the Mayan Tree of life. It symbolizes the axis Mundi, which means the stable world center.

The symbol constitutes a vertical line with a spinning top and bottom, connecting the three realms world, heaven, and the underworld.

The Baobab is the African symbol of the Tree of life. It is also called the upside-down Tree.

The Baobab tree of life has a life expectancy of approximately 1,500 years. It represents immortality.

Christian meaning of the Tree of life symbol

Different catholic popes and saints explained the Tree of life differently. Pope Benedict XVI mentioned the cross as the actual Tree of life. It connects you to God and heaven.

Then again, Saint Bonaventure said Christ is the fruit of the Tree of life. Saint Albert the Great also shared similar opinions.

What does the Bible say about the Tree of life?

The Bible mentions the Tree of life in Genesis twice. It says:

“The Lord God planted a garden toward the east, in Eden; and there He placed the man whom He had formed. Out of the ground the Lord God caused to grow every Tree that is pleasing to the sight and good for food; the Tree of life also in the midst of the garden and the Tree of the knowledge of good and evil.” – (Genesis 2:8-9)

Later it was also mentioned in Revelation.

“Then he showed me a river of the water of life, clear as crystal, coming from the throne of God and of the Lamb, in the middle of its street. On either side of the river was the Tree of life, bearing twelve kinds of fruit, yielding its fruit every month, and the leaves of the Tree were for the healing of the nations.” – (Revelation 22:1-2)

What does the Tree of life symbolize in Judaism?

The Kabbalah symbol represents the Tree of life in Judaism. It consists of 12 nodes and 22 lines that connect them.

The nodes symbolize the deities, angels, celestial beings, and values, while the lines represent the relationship among them.

What does the Tree of life symbolize in Islam?

According to Islam, there is only one Tree in the garden of Eden: the Shajarat al-Kholoud or the Tree of life. It is used as an example of good and bad ideas. A good idea represents a good tree, and a bad idea means a bad tree.

What is the Tree described in Quran?

The Sidrat al-Muntaha is the Tree described in the Holy Quran that makes the utmost boundary to the seven heavens. No one has ever gone beyond the Tree, except for the messenger of Allah, the prophet Muhammad (PBUH). Beyond the Tree, he met Allah and was instructed to pray salah five times daily.

What does the Tree of life mean in Buddhism?

The Tree of life in Buddhism means enlightenment. It is also known as the Bodhi tree, where the Gautam Buddha attained enlightenment.

What does the Tree of life mean and represent spiritually?

Like a tree growing, crossing thousands of barriers, we also need to expand our spiritual self to understand ourselves better, get closer to God, and find life’s true meaning.

The Yggdrasil tree and the Tree of life are two of the most critical trees in human life. They represent the universe’s balance and help us find our better selves with spiritual enlightenment.

Below is a Pinterest friendly photo…. so, you can pin it to your Rituals or Ancient Wisdom Board!